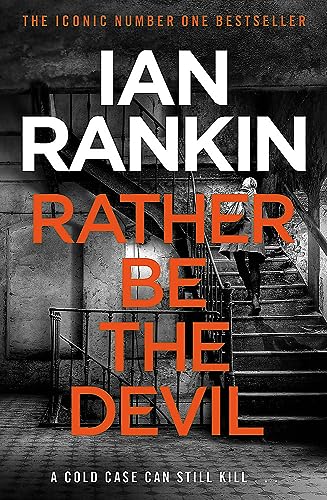 Rather Be the Devil
by Ian Rankin

Used Price
£3.59
New RRP £8.99
Free Shipping in the UK
The brilliant new Rebus novel from the author of No.1 besteller EVEN DOGS IN THE WILD.
Like New Very Good Good

Rather Be the Devil Summary

Rather Be the Devil: The superb Rebus No.1 bestseller (Inspector Rebus 21) by Ian Rankin

A CASE THAT WON'T DIE

John Rebus can't close the door on the death of glamorous socialite Maria Turquand. Brutally murdered in her hotel room forty years ago, her killer has never been found.

Meanwhile, Edinburgh's dark heart is up for grabs. Young pretender Darryl Christie may have staked his claim on the city's underworld - but has criminal mastermind and Rebus' long-time adversary, Big Ger Cafferty, really settled down to a quiet retirement? Or is he hiding in the shadows until Edinburgh is once more ripe for the picking?

Old Enemies. New Crimes. Rebus may be off the force, but he certainly isn't off the case.

'Superbly told, impossible to put down ... underlines the treasure that Rebus has become' Daily Mail

Rather Be the Devil Reviews

Superbly told, impossible to put down, and laced with Rankin's unmistakeable laconic wit it precisely underlines the treasure that Rebus has become. * DAILY MAIL *
Though it moves at pace, what makes this tale so satisfying is that its protagonists have had time to develop. Rebus's input serves to highlight the benefits of age, experience and keeping a sense of community. * GUARDIAN *
This elegantly crafted and witty thriller proves this old devil still has all the best tunes. * SUNDAY MIRROR *
Rankin is expert at what theorists of realism call the authenticating detail. * SCOTLAND ON SUNDAY *
Essential crime-reading. * SAGA *
This is an interesting and enjoyable novel. * LITERARY REVIEW *
Rather Be The Devil is an intricate, evocative Edinburgh mystery that builds to a bloody finale. Retirement may not suit Rebus but it's resulted in yet another brilliant book in Rankin's revived crime series. * CRIME SCENE *
This may be Rebus's 21st outing, but this is a cleverly crafted tale and Ian Rankin's storytelling is as fresh as ever. * IRISH NEWS *
The 21st Rebus novel boasts effortless plotting and a cracking narrative that keeps the reader gripped throughout. * DAILY EXPRESS *
Clever and compelling. * INDEPENDENT i *
Rather Be the Devil showcases Rankin and Rebus at their unstoppable best. * CHALLENGER *

GOR008456474
Rather Be the Devil: The superb Rebus No.1 bestseller (Inspector Rebus 21) by Ian Rankin
Ian Rankin
Used - Like New
Paperback
Orion Publishing Co
2017-04-26
384
1409159426
9781409159421
N/A
Book picture is for illustrative purposes only, actual binding, cover or edition may vary.
The book has been read, but looks new. The book cover has no visible wear, and the dust jacket is included if applicable. No missing or damaged pages, no tears, possible very minimal creasing, no underlining or highlighting of text, and no writing in the margins.