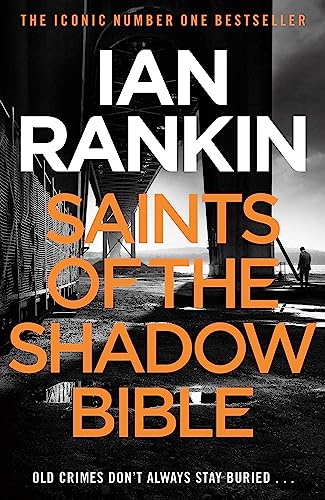 Saints of the Shadow Bible
by Ian Rankin

Saints of the Shadow Bible Summary

Saints of the Shadow Bible by Ian Rankin

Rebus is back on the force, albeit with a demotion and a chip on his shoulder. A 30-year-old case is being reopened, and Rebus's team from back then is suspected of foul play. With Malcolm Fox as the investigating officer, are the past and present about to collide in a shocking and murderous fashion? And does Rebus have anything to hide? His old colleagues called themselves 'the Saints', and swore a bond on something called 'the Shadow Bible'. But times have changed and the crimes of the past may not stay hidden much longer, especially with a referendum on Scottish independence just around the corner.

Who are the saints and who are the sinners? And can the one ever become the other?

Saints of the Shadow Bible Reviews

It's a novel densely packed with incident and intrigue, and Rankin's thriller plotting is sublime as ever...Rebus remains a remarkably lived-in and mesmerising figurehead of the genre * INDEPENDENT *
Along come reminders of why Rankin, and Rebus, take their place at the head of the pack. A brief phone conversation between Rebus and a colleague is so tight, so efficiently written and so funny that you fall in love with the series all over again...add the novel to your contacts, or at least your Christmas list * THE TIMES *
Subtle, and ambitious... it is a fascinating exploration of ideas of loyalty and allegiance in a changing world, as well as a welcome return for a battered but tenacious survivor * GUARDIAN *
Rebus is determinedly centre-stage in Rankin's finest novel for years. A first-rate thriller but also a forensic examination of contemporary Scottish society * INDEPENDENT *
Ian Rankin unfolds a mystery that intrigues enough to keep one reading to the end * LITERARY REVIEW *
He weaves his dual plots into an ever more tangled maze, and then smoothly, oh so satisfactorily, irons them out again. SAINTS OF THE SHADOW BIBLE is a clever, subtle read but most of all, it's a genuine pleasure to see Rebus back in CID * OBSERVER *
Praise be! Ian Rankin's maverick inspector is a cop once again... It is a tribute to Rankin's consummate skill that this complicated tale of "lying and cheating and concealing" is so streamlined.... A brilliant return - for Rebus and Rankin * EVENING STANDARD *