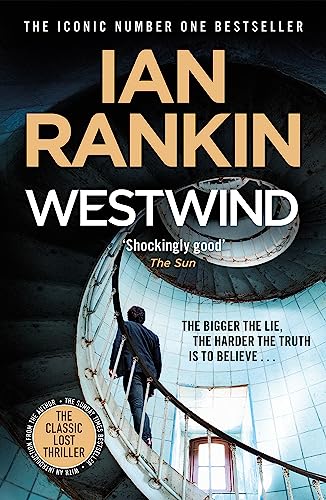 In Stock
£3.59
Discover the lost classic from iconic number one bestseller, Ian Rankin - The bigger the lie, the harder the truth is to believe...
Very Good Good Well Read
73 in stock

THE CLASSIC LOST THRILLER FROM THE ICONIC NUMBER ONE BESTSELLER

'Totally on the money - and ripe for this republication' i Newspaper

It always starts with a small lie. That's how you stop noticing the bigger ones.

After his friend suspects something strange going on at the satellite facility where they both work - and then goes missing - Martin Hepton doesn't believe the official line of "long-term sick leave"...

Refusing to stop asking questions, he leaves his old life behind, aware that someone is shadowing his every move. But why?

The only hope he has is his ex-girlfriend Jill Watson - the only journalist who will believe his story.

But neither of them can believe the puzzle they're piecing together - or just how shocking the secret is that everybody wants to stay hidden...

DISCOVER THE CLASSIC LOST THRILLER FROM THE ICONIC NUMBER ONE BESTSELLER.

'Rankin is a master storyteller'
Guardian

'One of Britain's leading novelists in any genre'
New Statesman

'A virtuoso of the craft'
Daily Mail

'Rankin is a phenomenon'
Spectator

'Quite simply, crime writing of the highest order'
Express

'Worthy of Agatha Christie at her best'
Scotsman

GOR010561549
Westwind: The classic lost thriller by Ian Rankin
Ian Rankin
Used - Very Good
Paperback
Orion Publishing Co
2020-06-09
352
1409196062
9781409196068
N/A
Book picture is for illustrative purposes only, actual binding, cover or edition may vary.
The book has been read, but looks new. The book cover has no visible wear, and the dust jacket is included if applicable. No missing or damaged pages, no tears, possible very minimal creasing, no underlining or highlighting of text, and no writing in the margins.