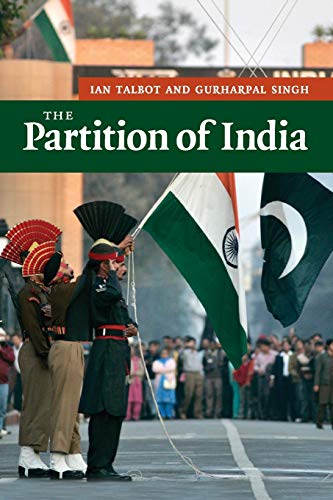 The Partition of India
by Ian Talbot (University of Southampton)

In Stock
£9.99
An account of the partition of India detailing the events that led up to it, the terrors that accompanied it, and migration and resettlement. Accompanied by photographs, maps and a chronology of events, it is intended for students as a portal into the history and politics of the Asian region.
Very Good
Only 1 left

The Partition of India Summary

The Partition of India by Ian Talbot (University of Southampton)

The British divided and quit India in 1947. The partition of India and the creation of Pakistan uprooted entire communities and left unspeakable violence in its trail. This volume tells the story of partition through the events that led up to it, the terrors that accompanied it, to migration and resettlement. In a new shift in the understanding of this seminal moment, the book also explores the legacies of partition which continue to resonate today in the fractured lives of individuals and communities, and more broadly in the relationship between India and Pakistan and the ongoing conflict over contested sites. In conclusion, the book reflects on the general implications of partition as a political solution to ethnic and religious conflict. The book, which is accompanied by photographs, maps and a chronology of major events, is intended for students as a portal into the history and politics of the Asian region.

The Partition of India Reviews

'The publication of this well-written, concise and informative volume by two leading scholars in their field is a welcome appearance for scholars and students of South Asian studies, as well as for those interested in the study of ethnic violence, partition, forced migration and refugee resettlement in general.' Sadia Bajwa, H-Soz-u-Kult
'One of the nuggets in this book has Altaf Hussain, a modern leader of Pakistan's Mohajir community, describing Partition as 'the biggest blunder in the history of humanity'. In this readable and useful text, the authors set out to make sense of all those who blundered and why, and to set events in a wider context.' Asian Affairs
"In short, this is a superb, authoritative, reliable, and highly judicious introduction to the partition of India.... Highly recommended." - Choice
"This is a sophisticated work by two eminent scholars that greatly widens and deepens our understanding of India's division in 1947 and of its lasting legacies and significance for the people of India and Pakistan. With its attention to recent advances in Partition historiography, and with the provision of maps, photographs, a glossary, and a chronology of main events from 1937 to 1947, this volume will be appreciated by all teachers and students of modern South Asia." - H-Net

About Ian Talbot (University of Southampton)

Ian Talbot is Professor of History at the University of Southampton. His recent publications include The Deadly Embrace: Religion, Politics and Violence in India and Pakistan 1947-2002 (ed., 2007) and Divided Cities: Partition and its Aftermath in Lahore and Amritsar 1947-1957 (2006). Gurharpal Singh is Nadir Dinshaw Professor of Inter-Religious Relations in the Department of Theology and Religion at the University of Birmingham. His recent publications include Governance in Multicultural Societies (ed. with John Rex, 2004) and Culture and Economy in the Indian Diaspora (ed. with Bhikhu Parekh and Steven Vertovec, 2003).

1. Understanding the partition historiography; 2. The road to 1947; 3. Violence and partition; 4. Migration and resettlement; 5. Partition legacies: ethnic and religious nationalism; 6. An enduring rivalry: India and Pakistan since 1947.

GOR005022822
The Partition of India by Ian Talbot (University of Southampton)
Ian Talbot (University of Southampton)
New Approaches to Asian History
Used - Very Good
Paperback
Cambridge University Press
2009-07-23
226
0521672562
9780521672566
N/A
Book picture is for illustrative purposes only, actual binding, cover or edition may vary.
This is a used book - there is no escaping the fact it has been read by someone else and it will show signs of wear and previous use. Overall we expect it to be in very good condition, but if you are not entirely satisfied please get in touch with us.