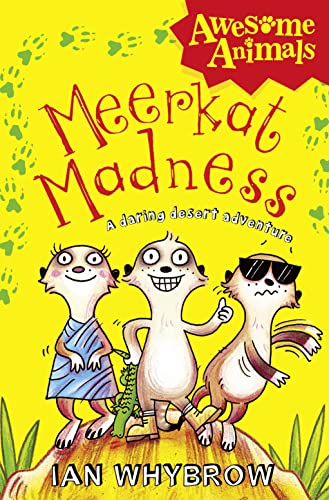 The first book in the hilarious Awesome Animals series - awesome adventures with the wildest wildlife.

The first book in the hilarious Awesome Animals series - awesome adventures with the wildest wildlife.

Meerkat Madness is the story of a burrow of meerkat pups and their eccentric babysitter, Uncle Fearless who once travelled to the Blah-Blah camp at the edge of the desert. Truth be told, Uncle is a bit of a show-off but the pups love his colourful stories even if they don't really believe them.

But then they find a mysterious object buried in the sand and it isn't long before they are caught up in a daring adventure of their own!

A hilarious story about ever-endearing meerkats from the creator of Harry and the Bucketful of Dinosaurs.

"A humorous and fast paced animal adventure with black and white illustrations which will make you giggle even more." Liverpool Echo

"Get ready for a fresh set of escapades with Ian Whybrow's Meerkat Madness. Humorous and fast paced, this book is for anyone who loves a good tale about action-packed animals." Aldershot News and Mail

Ian Whybrow's many popular successes range from picture books to novels for older children. Best known for his original humour, he has a brilliant ear for voices, and takes pride in the fact that his work reads aloud very well. 'I loved being read to as a child,' he says. 'And I loved the sense that my parents were enjoying it too. For me, that's the acid test for any book - that there's something in it for everyone to enjoy.'

GOR002654014
Meerkat Madness (Awesome Animals) by Ian Whybrow
Ian Whybrow
Awesome Animals
Used - Very Good
Paperback
HarperCollins Publishers
2011-03-03
208
0007411537
9780007411535
N/A
Book picture is for illustrative purposes only, actual binding, cover or edition may vary.
This is a used book - there is no escaping the fact it has been read by someone else and it will show signs of wear and previous use. Overall we expect it to be in very good condition, but if you are not entirely satisfied please get in touch with us.