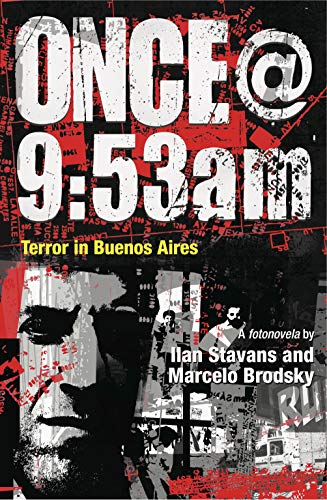 Originally published in Spanish. A graphic novel, part documentary, part fiction, using the fotonovela form to imagine the two hours before the terrorist attack against the Jewish community center in Buenos Aires in 1994. Explores the faulty police investigation of the atrocity, and minorities' vulnerability in democratic societies.

At 9:53 on the morning of July 18, 1994, a suicide bomber drove a Renault Trafic van loaded with explosives into the Asociacion Mutual Israelita Argentina, a Jewish community center in the bustling commercial neighborhood of Once, Buenos Aires. The explosion left eighty-five people dead and over three hundred wounded. Originally published in Spanish amid widespread controversy, Once@9:53am: Terror in Buenos Aires imagines the two hours before the attack through the popular format of the fotonovela.

Part documentary, part fiction, this vivid retelling of Argentina's deadliest bombing depicts a vibrant, complex urban community in the hours before its identity was forever changed. This expanded English edition includes a new essay by Ilan Stavans detailing the aftermath of the attack and the faulty investigations that have yet to yield any arrests or reach resolution.

A unique and powerful visual experience, Once@9:53am is both a commemoration of an atrocity that shifted Latin American Jewish identity in innumerable ways and an ingenious use of a popular format to explore the dangerous intersection of politics and religion in Latin America.

"This is a book that all of us need to read and study, so that we never get accustomed to atrocities and never take them for granted."

"Creative dream team Stavans and Brodsky skillfully interweave poignant prose with striking imagery that builds to a slow, painful crescendo in the moments leading up to an apocalyptic punctum: the 1994 explosion in the Once neighborhood of Buenos Aires. Everyday Jewish life explodes with dark horror, resonating with a planetary history of Jewish persecution and genocide. Like Jan Komski, Edith Birkin, and Primo Levi, who have dared to turn catastrophic events into art, Once@9:53am exposes the unbearable, tragic tyranny of terrorism."

-Frederick Luis Aldama, author of The Aesthetics of Discomfort (with Herbert Lindenberger) and Your Brain on Latino Comics

"Hemmed in by simplistic conventions, [the fotonovela] seems an unlikely form for so dark a tale as this, and yet it is precisely the ways in which Stavans, who wrote the text, and Brodsky, who took the photographs, both use and modify the conventions that makes Once@9:53am the powerful work it is."

"A unique work in a unique form that should not be missed by anyone interested in Latin American Jewish culture."

Ilan Stavans is Lewis-Sebring Professor in Latin American and Latino Culture at Amherst College and the publisher of Restless Books. His books include On Borrowed Words (2001) and Quixote: The Novel and the World (2015). He is the general editor of The Norton Anthology of Latino Literature.

Marcelo Brodsky trained at the International Center of Photography, Barcelona. He is a member of the Buena Memoria human rights organization and the Pro-Monument to the Victims of Terrorism Commission.

GOR009947619
Once@9:53am: Terror in Buenos Aires by Ilan Stavans
Ilan Stavans
Dimyonot
Used - Good
Paperback
Pennsylvania State University Press
2016-10-14
136
0271077182
9780271077185
N/A
Book picture is for illustrative purposes only, actual binding, cover or edition may vary.
The book has been read but remains in clean condition. All pages are intact and the cover is intact. Some minor wear to the spine.