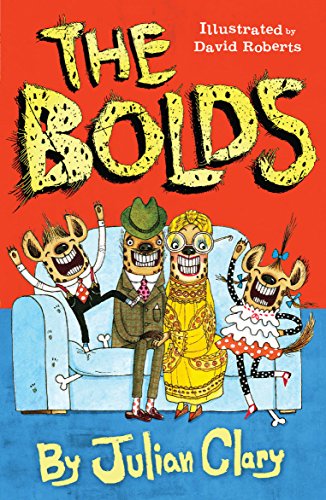 The Bolds
by Illustrated by David Roberts

Out of Stock
Mr and Mrs Bold are just like you and me: they live in a nice house (in Teddington), they have jobs (like writing Christmas cracker jokes) and they love to have a bit of a giggle.
Good
Only 0 left

The Bolds by Illustrated by David Roberts

Mr and Mrs Bold are just like you and me: they live in a nice house (in Teddington), they have jobs (like writing Christmas cracker jokes) and they love to have a bit of a giggle. One slight difference: they're hyenas. Yes, that's right - they're covered in fur, have tails tucked into their trousers, and they really, really like to laugh. So far, the Bolds have managed to keep things under wraps, even when their children Bobby and Betty were born. But the nosy man next door smells a rat (or a hyena), and a trip to the local wildlife park, and the brilliantly wacky heist that results, could be the end of Teddington's best-kept secret. Whatever will the neighbours think?

"The book's hilarious plot and abundant illustrations make it a top choice for reluctant readers. Wildly original and very funny" * Kirkus, starred review *
"Although Clary plays up the humour the underlying warm message is of tolerance towards those who are supposedly different from the norm. Glorious black-and-white illustrations add to the mayhem." * Daily Mail *
"Joyful" * Telegraph, Best Holiday Reading for Kids *
"Funny and clever with a good dose of yucky humour. Children will appreciate the wry digs at the nonsense of modern living and Roberts' illustrations are an absolute delight." * The Bookseller, Fiona Noble *
"Roberts' manically expressive black and white illustrations capitalize on the unapologetically silly premise... Clary mixes animal fact with imaginative, entertaining fiction." * Publishers Weekly *
"We loved the silliness and laughter that runs throughout, and the illustrations are brilliant. Heaps of fun." * Heat *
"My two children and I all love The Bolds. An allegory for feeling like an outsider and is written in the most imaginative and sensitive way." -- Kate Garraway * Mail on Sunday *
"The animals are amongst us! This lovely book will have kids rolling on the floor with mirth while their parents roll their eyes in recognition of human folly." * Fay Weldon *
"Underscoring the slapstick appeal is a message about understanding others' differences... Fans of Roald Dahl will find much to appreciate here." * School Library Journal *
"This entertaining tale will make readers chortle. A good choice for reluctant readers and fans of Captain Underpants." * Booklist *

About Illustrated by David Roberts

Julian Clary is a comedian, entertainer and novelist, who has toured across the world with his one-man shows. He became a household name in the late 1980s, and remains one of the country's most popular (and least predictable) entertainers. Julian has appeared on numerous popular TV shows including Celebrity Big Brother (which he won), Strictly Come Dancing, This Morning, QI, Have I Got News For You and is a regular panellist on BBC Radio 4's Just a Minute. He has starred in West End productions of Taboo and Cabaret, and appears in panto most years - he loves wearing silly clothes and lots of make up! Julian also narrates the Little Princess children's television series. He lives in Kent with his partner, dogs and several chickens. David Roberts is an award-winning illustrator who has earned great acclaim for his distinctive style. He was born in Liverpool and studied fashion design at university in Manchester. After graduating, he worked as a milliner and a fashion illustrator, but always felt his true calling was in children's books. David finally realised his dream when his first book was published in 1998, and since then he has collaborated with some of Britain's finest children's authors, including Julia Donaldson, Sally Gardner, Philip Ardagh and Jacqueline Wilson. He is also the creator of the popular Dirty Bertie books. He lives in London with his partner.

GOR007209401
The Bolds by Illustrated by David Roberts
Illustrated by David Roberts
The Bolds
Used - Good
Paperback
Andersen Press Ltd
2015-07-30
272
1783443057
9781783443055
N/A
Book picture is for illustrative purposes only, actual binding, cover or edition may vary.
This is a used book - there is no escaping the fact it has been read by someone else and it will show signs of wear and previous use. Overall we expect it to be in very good condition, but if you are not entirely satisfied please get in touch with us.