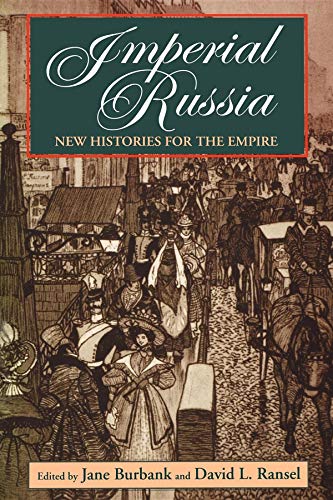 In Stock
£17.99
Fresh approaches to the history of the Russian Empire.
Very Good
Only 1 left

On the basis of the work presented here, one can say that the future of American scholarship on imperial Russia is in good hands." -American Historial Review

Anyone wishing to understand the 'state of the field' in Imperial Russian history would do well to start with this collection." -Theodore W. Weeks, H-Net Reviews

The essays are impressive in terms of research conceptualization, and analysis." -Slavic Review

Presenting the results of new research and fresh approaches, the historians whose work is highlighted here seek to extend new thinking about the way imperial Russian history is studied and taught. Populating their essays are a varied lot of ordinary Russians of the 18th and 19th centuries, from a luxury-loving merchant and his extended family to reform-minded clerics and soldiers on the frontier. In contrast to much of traditional historical writing on Imperial Russia, which focused heavily on the causes of its demise, the contributors to this volume investigate the people and institutions that kept Imperial Russia functioning over a long period of time.

Part 3: Practices of Empire
6. Lines of Uncertainty: The Frontiers of the Northern Caucasus Thomas M. Barrett
7. An Empire of Peasants: Empire-Building, Interethnic Interaction, and Ethnic Stereotyping in the Rural World of the Russian Empire Willard Sunderland
8. The Serf Economy, the Peasant Family and the Social Order Steven L. Hoch
9. Institutionalizing Piety: The Church and Popular Religion, 1750-1850 Gregory L. Freeze
Part 4: Individuals and Publics
10. An Eighteenth-Century Russian Merchant Family in Prosperity and Decline David L. Ransel
11. Freemasonry and the Public in Eighteenth-Century Russia Douglas Smith
12. Constructing the Meaning of: The Russian Press in the Age of the Great Reforms Irina Paperno

In Place of a Conclusion Jane Burbank

GOR007258031
Imperial Russia: New Histories for the Empire by
Indiana-Michigan Series in Russian and East European Studies
Used - Very Good
Paperback
Indiana University Press
1998-06-01
384
0253212413
9780253212412
N/A
Book picture is for illustrative purposes only, actual binding, cover or edition may vary.
This is a used book - there is no escaping the fact it has been read by someone else and it will show signs of wear and previous use. Overall we expect it to be in very good condition, but if you are not entirely satisfied please get in touch with us.