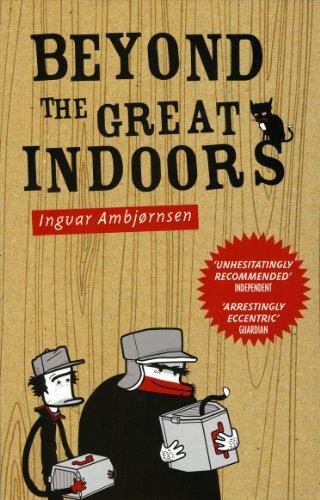 Beyond The Great Indoors
by Ingvar Ambjornsen

In Stock
£6.99
Elling has a wildly overactive imagination and has been molly-coddled by his mother all his life, so when she dies he is left completely incapable of taking care of himself.
Very Good Well Read
Only 2 left

Beyond The Great Indoors Summary

Beyond The Great Indoors by Ingvar Ambjornsen

Elling has a wildly overactive imagination and has been molly-coddled by his mother all his life, so when she dies he is left completely incapable of taking care of himself. After a stint in the very helpful Broynes Rehabilitation Centre, Elling returns to Oslo with his room-mate Kjell Bjarne in tow. Together the odd couple embark on a free-spirited new life. On a quest to live like normal average people, Elling and Kjell's friendship grows - kittens, girlfriends and terrorist poetry enter the equation - even fame beckons. But there are fears to conquer before that, answering the telephone for one, leaving the house for another and the journey outdoors is by no means an easy one. A touching and hiliarious comedy of anxiety from Norway's biggest talent, Beyond the Great Indoors rejoices in the simplest pleasures of life and reminds us of the importance of conquering our everyday fears.

Beyond The Great Indoors Reviews

"'Hilarious ... Told with balance, pace and wit ... This book is unhesitatingly recommended as a bizarrely ordinary celebration of friendship, love and adventure against the odds.'" * Independent *
"'Ambjornsen creates a gentle, but never saccharine, comedy out of Elling's tentative engagement with the world beyond the great indoors. He gives Elling an endearing, childishly direct voice, but adds an edge of anger that keeps the tone arrestingly eccentric.'" * Guardian *
"'Brilliant.'" * FHM (Best New Fiction) *

Ingvar Ambjornsen was born in 1956 and is considered one of the most important contemporary Norwegian writers as well as one of the most popular. Alongside his comic series of four Elling novels, he has also written some more literary novels and children's books. He was won several literary prizes in Norway.

GOR001100594
Beyond The Great Indoors by Ingvar Ambjornsen
Ingvar Ambjornsen
Used - Very Good
Paperback
Transworld Publishers Ltd
2005-02-01
304
0552772097
9780552772099
N/A
Book picture is for illustrative purposes only, actual binding, cover or edition may vary.
This is a used book - there is no escaping the fact it has been read by someone else and it will show signs of wear and previous use. Overall we expect it to be in very good condition, but if you are not entirely satisfied please get in touch with us.