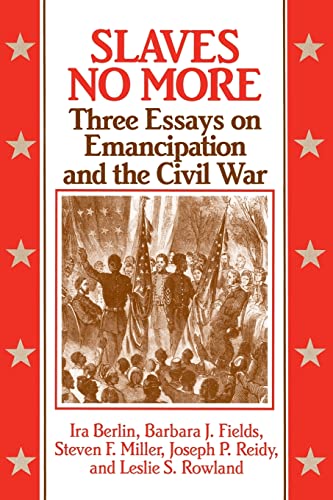 Slaves No More
by Ira Berlin

In Stock
£3.59
Three essays present an introduction and history of the emancipation of the slaves during the Civil War by tracing the destruction of slavery, examining the evolution of freedom, and finally demonstrating how the war itself was transformed into a struggle for universal liberty.
Very Good
Only 1 left

Slaves No More: Three Essays on Emancipation and the Civil War by Ira Berlin

The three essays in this volume present an introduction and history of the emancipation of the slaves during the Civil War. The first essay traces the destruction of slavery by discussing the shift from a war for the Union to a war against slavery. The slaves are shown to have shaped the destiny of the nation through their determination to place their liberty on the wartime agenda. The second essay examines the evolution of freedom in occupied areas of the lower and upper South. The struggle of those freed to obtain economic independence in difficult wartime circumstances indicates conflicting conceptions of freedom among former slaves and slaveholders, Northern soldiers and civilians. The third essay demonstrates how the enlistment and military service of nearly 200,000 slaves hastened the transformation of the war into a struggle for universal liberty, and how this experience shaped the lives of these former slaves long after the war had ended.

"Scholars familiar with the studies being produced by Berlin et al., Freedom: A Documentary History of Emancipation, 1861-1867 will welcome this compact volume as a succinct statement of the emancipation process emerging from the authors' larger edited works....Slaves No More provides a path to the cutting edge of scholarship in this field. Now, students need not rehash the old issues, but they can begin their studies with newly framed questions poignantly outlined by these skilled authors." The Journal of Southern History
"Slaves No More expands the best of previous scholarship by bringing into the power equation a segment of people, whose role had been previously downplayed or ignored, by emphasizing the active part played by this politically porless group." History: Review of New Books
"In preparing this volume the five authors...redesigned their original introductory essays to include extensive footnote references to both the documents on which the essays are based and to recent scholarship on the Civil War and emancipation. That feature increases the value and enlarges the contribution of this volume, which provides a self-contained analysis of how men and women struggled to enlarge their freedom and secure their independence." Mary Jo Bratton, North Carolina Historical Review
"It is one of the greatest strengths of Slaves No More that black Southerners emerge both as hapless victims and as independent agents in the military and ideological contest that was the Civil War....Slaves No More remains a significant and most welcome contribution to the field. The scholar, the student and the general reader will all find in Slave No More a coherent, insightful, provocative, and, above all, a highly readable account of the experiences of the four million men, women and children whose future was determined on the battlefield, in the White House, in the halls of Congress, and in their everyday interactions with their fellow Americans." Julie Winch, Labor History
"As an examination of the process of emancipation, Slaves No More is both valuable and stimulating in its own right." S.-M. Grant, Journal of American Studies

GOR004808365
Slaves No More: Three Essays on Emancipation and the Civil War by Ira Berlin
Ira Berlin
Used - Very Good
Paperback
Cambridge University Press
1992-11-27
265
0521436923
9780521436922
N/A
Book picture is for illustrative purposes only, actual binding, cover or edition may vary.
This is a used book - there is no escaping the fact it has been read by someone else and it will show signs of wear and previous use. Overall we expect it to be in very good condition, but if you are not entirely satisfied please get in touch with us.