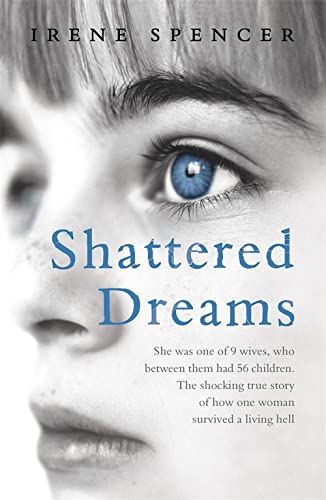 In Stock
£4.99
A fearlessly honest inspirational memoir about surviving and escaping a polygamous marriage
Very Good Good
Only 2 left

Shattered Dreams: Surviving the hell of a polygamous marriage by Irene Spencer

Irene Spencer grew up in a fundamentalist, polygamous Mormon village in Arizona. The thirteenth of thirty-one children, she grew up in abject poverty and isolation, and was taught that she should never question the church leaders. Her mother, unable to cope, left her children and three 'sister-wives' with her abusive husband.

Desperate to escape her violent home, and believing she had no choice but to live by 'the Principle', at sixteen Irene found herself in a plural marriage, sharing her husband with her half sister. When the government raided her village, she fled with Verlan, numerous other wives and countless children to a ranch in Mexico where Verlan's brother, a self-proclaimed prophet, was attempting to found a new Mormon colony.

The strains of husband-sharing with - ultimately - nine other wives were unbelievably hard. Irene's story provides a fascinating insight into polygamous marriage - the squabbles and the jealousy, and the agony of watching your husband choose other wives over you. They lived with divided loyalties in unremitting deprivation - struggling to maintain so many households and to bring up 56 children.

Irene eventually escaped with her children and made the bold step into the outside world and into a freedom she never knew existed.

Irene has led a truly extraordinary life and her harrowing story will appall and astonish, but in the end her courage and determination to find a better life for her 13 children is incredibly inspiring.

Irene Spencer currently lives in Alaska with her husband of 17 years, Hector Spencer. During the 28 years of her first marriage to a polygamous husband, Irene gave birth to 13 children (all single births). She also adopted a newborn daughter. Irene has 114 grandchildren.

GOR000996507
Shattered Dreams: Surviving the hell of a polygamous marriage by Irene Spencer
Irene Spencer
Used - Very Good
Paperback
Hodder & Stoughton General Division
2007-01-01
400
0340963611
9780340963616
N/A
Book picture is for illustrative purposes only, actual binding, cover or edition may vary.
This is a used book - there is no escaping the fact it has been read by someone else and it will show signs of wear and previous use. Overall we expect it to be in very good condition, but if you are not entirely satisfied please get in touch with us.