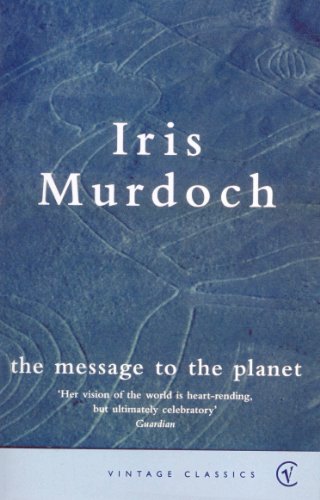 The Message To The Planet
by Iris Murdoch

For years, Alfred Ludens has pursued mathematician and philosopher Marcus Vallar in the belief that he possesses a profound metaphysical formula, a missing link of great significance to mankind. Patrick Fenman, poet, is dying because he thinks Marcus has cursed him.

Can human thinking discover the foundations of human consciousness?

The Message To The Planet Summary

The Message To The Planet by Iris Murdoch

For years, Alfred Ludens has pursued mathematician and philosopher Marcus Vallar in the belief that he possesses a profound metaphysical formula, a missing link of great significance to mankind.

Luden's friends are more sceptical. Jack Sheerwater, painter, thinks Marcus is crazy. Gildas herne, ex-preist, thinks he is evil. Patrick Fenman, poet, is dying because he thinks Marcus has cursed him. Marcus has disappeared and must be found.

But is he a genius, a hero struggling at the bounds of human knowledge? Is he seeking God, or is he just another victim of the Holocaust, which casts its shadow upon him and upon Ludens, both of them Jewish?

Can human thinking discover the foundations of human consciousness?

Iris Murdoch's endlessly inventive imagination has touched a fundamental question of our time.

Customer Reviews - The Message To The Planet

The Message To The Planet Reviews

She was a brilliantly clever woman -- Dame Judi Dench
There is no doubt in my mind that Iris Murdoch is one of the most important novelists now writing in English...The power of her imaginative vision, her intelligence and her awareness and revelation of human truth are quite remarkable * The Times *
I love the novels of Iris Murdoch -- Philippa Gregory
Miss Murdoch is blessedly clever without any of the aridity which, for some reason, that word is supposed to imply -- Philip Toynbee
Iris Murdoch has imposed her alternative world on us as surely as Christopher Columbus or Graham Greene * Sunday Times *

Iris Murdoch was born in Dublin in 1919. She read Classics at Somerville College, Oxford, and after working in the Treasury and abroad, was awarded a research studentship in Philosophy at Newnham College, Cambridge. In 1948 she returned to Oxford as fellow and tutor at St Anne's College and later taught at the Royal College of Art. Until her death in 1999, she lived in Oxford with her husband, the academic and critic, John Bayley. She was made a Dame of the British Empire in 1987 and in the 1997 PEN Awards received the Gold Pen for Distinguished Service to Literature.

Iris Murdoch made her writing debut in 1954 with Under the Net. Her twenty-six novels include the Booker prize-winning The Sea, The Sea (1978), the James Tait Black Memorial prize-winning The Black Prince (1973) and the Whitbread prize-winning The Sacred and Profane Love Machine (1974). Her philosophy includes Sartre: Romantic Rationalist (1953) and Metaphysics as a Guide to Morals (1992); other philosophical writings, including 'The Sovereignty of Good' (1970), are collected in Existentialists and Mystics (1997).