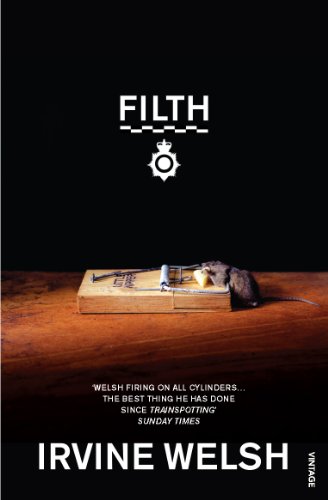 In Stock
£4.49
With the festive season almost upon him, Detective Sergeant Bruce Robertson is winding down at work and gearing up socially - kicking off Christmas with a week of sex and drugs in Amsterdam.
Very Good Good
19 in stock

With the festive season almost upon him, Detective Sergeant Bruce Robertson is winding down at work and gearing up socially - kicking off Christmas with a week of sex and drugs in Amsterdam. There are irritating flies in the ointment, though, including a missing wife, a nagging cocaine habit, a dramatic deterioration in his genital health, a string of increasingly demanding extra-marital affairs. The last thing he needs is a messy murder to solve. Still it will mean plenty of overtime, a chance to stitch up some colleagues and finally clinch the promotion he craves. But as Bruce spirals through the lower reaches of degradation and evil, he encounters opposition - in the form of truth and ethical conscience - from the most unexpected quarter of all: his anus. In Bruce Robertson, Welsh has created one of the most corrupt, misanthropic characters in contemporary fiction , and has written a dark, disturbing and very funny novel about sleaze, power, and the abuse of everything. At last, a novel that lives up to its name.

"Welsh firing on all cylinders... The best thing he has done since Trainspotting" * Sunday Times *
"It is surely a remarkable cultural moment when a reviewer is offered cash in a bar for an advance copy of a literary novel... Filth is a masterpiece...squarely in the classic line of classic scottish writing" * Independent *
"Things are going well for Detective Sergeant Bruce Robertson. Promotion is in the offing, he's got all the booze and drugs he needs, and his various plots aimed at friends and colleagues seem to be working out. Robertson, compulsive and repulsive by turns, has only two problems. One is a case of racially-motivated murder on his patch. The other is that there's a nasty tapeworm in his gut and it seems intent on having its say... A brutally sustained achievement" * Evening Standard *
"We're used to tough cops with non-PC attitudes, but Welsh trumps the lot with his evil-scheming, ball-scratching, foul-mouthed hero-with-haemorrhoids... Welsh's jet-black comedy at once entertains and appals... Gloriously grotesque" * Esquire *
"A snarling epic of a book...ugly, devastatingly funny, unremittingly nasty and pulls no punches... Don't dare miss it" * Scotsman *

Irvine Welsh is the author of eleven previous novels and four books of shorter fiction. He currently lives in Chicago.

GOR000527788
Filth by Irvine Welsh
Irvine Welsh
Used - Very Good
Paperback
Vintage Publishing
1999-08-05
416
0099591111
9780099591115
N/A
Book picture is for illustrative purposes only, actual binding, cover or edition may vary.
This is a used book - there is no escaping the fact it has been read by someone else and it will show signs of wear and previous use. Overall we expect it to be in very good condition, but if you are not entirely satisfied please get in touch with us.