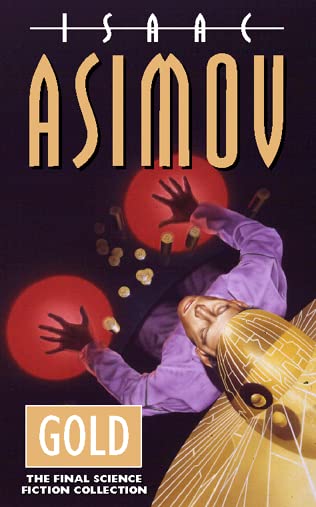 The last Isaac Asimov science fiction collection which contains all of his previously uncollected stories.

The last Isaac Asimov science fiction collection which contains all of his previously uncollected stories.

Gold is Isaac Asimov's last science fiction collection' one containing all of his uncollected SF stories that had never before appeared in book form. Gold is the final and crowning achievement of the fifty-five year career of science fiction's transcendent genius' the world-famous author who defined the field of SF for its practitioners' for its millions of readers' and for the world at large.

The stories collected here for the first time range from the humorous to the profound' for Asimov was engaged until the end of his days in the work of redefining and expanding the boundaries of the literature he loved' and indeed' helped create. And there is more. For at the heart of this extraordinary compendium is the title story' "Gold'" a moving and revealing drama about a writer who gambles everything on a chance at immortality-a gamble Asimov himself made. And won.

GOR000705376
Gold by Isaac Asimov
Isaac Asimov
Used - Very Good
Paperback
HarperCollins Publishers
1996-06-10
400
0006482023
9780006482024
N/A
Book picture is for illustrative purposes only, actual binding, cover or edition may vary.
This is a used book - there is no escaping the fact it has been read by someone else and it will show signs of wear and previous use. Overall we expect it to be in very good condition, but if you are not entirely satisfied please get in touch with us.