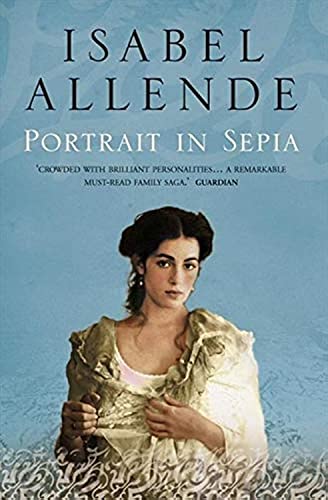 Portrait in Sepia
by Isabel Allende

Portrait in Sepia by Isabel Allende

`Portrait in Sepia' is both a magnificent historical novel set at the end of the nineteenth century in Chile and a marvellous family saga peopled by characters from `Daughter of Fortune' and `The House of the Spirits', two of Allende's most celebrated novels.

As a young girl, Aurora del Valle suffered a brutal trauma that has shaped her character and erased from her mind all recollection of the first five years of her life. Raised by her ambitious grandmother, the regal and commanding Paulina del Valle, she grows up in a privileged environment, free of the limitations that circumscribe the lives of women at that time, but tormented by terrible nightmares. When she finds herself alone at the end of an unhappy love affair, she decides to explore the mystery of her past, to discover what it was, exactly, all those years ago, that had such a devastating effect on her young life.

Richly detailed, epic in scope, this engrossing story of the dark power of hidden secrets is intimate in its probing of human character, and thrilling in the way it illuminates the complexity of family ties.

`You'll find it hard not to be beguiled by the charm and ingenuity of Allende's storytelling.' The Times

'Though its story is the life of Aurora del Valle, a privileged young girl growing up in 19th century Chile, its subject is history, and the way in which the lives of people and the lives of countries exist in uneasy limbo, caught between the shadows of the past and the mysteries of the future. It's a world of secrets and uneasy truces; all that is certain is death, and all that is valuable is love.' Jeremy Poolman, Daily Mail

'If you were thrilled by "The House of the Spirits", you'll love this.' Marie Claire

'A wonderful, wide-ranging story, which moves back to Chile, and is told in a clever mix of first and third person. Allende's dramatic descriptions of hand-to-hand combat and bloody battle scenes are every bit as vivid and physical as her descriptions of wild passionate love-making. A compulsively readable, colourful, informative and entertaining novel.' Sunday Tribune

GOR000485606
Portrait in Sepia by Isabel Allende
Isabel Allende
Used - Very Good
Paperback
HarperCollins Publishers
2002-07-08
320
0007123019
9780007123018
N/A
Book picture is for illustrative purposes only, actual binding, cover or edition may vary.
This is a used book - there is no escaping the fact it has been read by someone else and it will show signs of wear and previous use. Overall we expect it to be in very good condition, but if you are not entirely satisfied please get in touch with us.