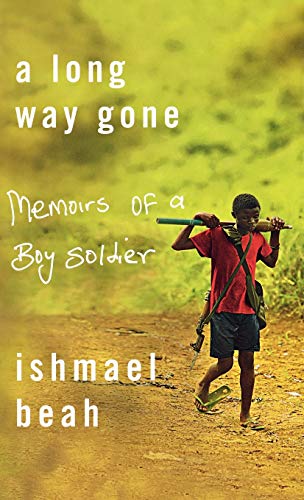 In Stock
£2.39
What is war like through the eyes of a child soldier? This title tells the author's story: how at the age of twelve, he fled attacking rebels and wandered a land rendered unrecognizable by violence. By thirteen, he'd been picked up by the government army, and found that he was capable of truly terrible acts.
Very Good
Only 3 left

A Long Way Gone: Memoirs of a Boy Soldier by Ishmal Beah

This is how wars are fought now: by children, hopped-up on drugs and wielding AK-47s. Children have become soldiers of choice. In the more than fifty conflicts going on worldwide, it is estimated that there are some 300,000 child soldiers. Ishmael Beah used to be one of them. What is war like through the eyes of a child soldier? How does one become a killer? How does one stop? Child soldiers have been profiled by journalists, and novelists have struggled to imagine their lives. But until now, there has not been a first-person account from someone who came through this hell and survived. In "A Long Way Gone", Beah, now twenty-five years old, tells a riveting story: how at the age of twelve, he fled attacking rebels and wandered a land rendered unrecognizable by violence. By thirteen, he'd been picked up by the government army, and Beah, at heart a gentle boy, found that he was capable of truly terrible acts. This is a rare and mesmerizing account, told with real literary force and heartbreaking honesty.

"A breathtaking and unselfpitying account of how a gentle spirit survives a childhood from which all innocence has suddenly been sucked out. It's a truly riveting memoir." --Time Magazine

"Deeply moving, even uplifting...Beah's story, with its clear-eyed reporting and literate particularity--whether he's dancing to rap, eating a coconut or running toward the burning village where his family is trapped--demands to be read. (Critic's Choice, Four stars)" --People Magazine

"Beah's memoir, A Long Way Gone (Farrar, Straus and -Giroux), is unforgettable testimony that Africa's children--millions of them dying and orphaned by preventable diseases, hundreds of thousands of them forced into battle--have eyes to see and voices to tell what has happened. And what voices! How is it possible that 26-year-old Beah, a nonnative English speaker, separated from his family at age 12, taught to maim and to kill at 13, can sound such notes of -family happiness, of friendship under duress, of quiet horror? No outsider could have written this book, and it's hard to imagine that many -insiders could do so with such acute vision, stark language, and tenderness. It is a heart-rending achievement." --Melissa Fay Greene, Elle Magazine

"When Beah is finally approached about the possibility of serving as a spokesperson on the issue of child soldiers, he knows exactly what he wants to tell the world: "I would always tell people that I believe children have the resilience to outlive their sufferings, if given a chance."
Others may make the same assertions, but Beah has the advantage of stating them in the first person. That makes A Long Way Gone all the more gripping." --Christian Science Monitor

"In place of a text that has every right to be a diatribe against Sierra Leone, globalization or even himself, Beah has produced a book of such self-effacing humanity that refugees, political fronts and even death squads resolve themselves back into the faces of mothers, fathers and siblings. A Long Way Gone transports us into the lives of thousands of children whose lives have been altered by war, and it does so with a genuine and disarmingly emotional force." --Minneapolis Star Tribune

"What Beah saw and did during [the war] has haunted him ever since, and if you read his stunning and unflinching memoir, you'll be haunted, too . . . It would have been enough if Ishmael Beah had merely survived the horrors described in A Long Way Gone. That he has written this unforgettable firsthand account of his odyssey is harder still to grasp. Those seeking to understand the human consequences of war, its brutal and brutalizing costs, would be wise to reflect on Ishmael Beah's story." --Philadelphia Inquirer

"Beah speaks in a distinctive voice, and he tells an important story." --The Wall Street Journal

"Hideously effective in conveying the essential horror of his experiences." --Kirkus Reviews

"Extraordinary . . . A ferocious and desolate account of how ordinary children were turned into professional killers." --The Guardian UK

"A Long Way Gone is one of the most important war stories of our generation. The arming of children is among the greatest evils of the modern world, and yet we know so little about it because the children themselves are swallowed up by the very wars they are forced to wage. Ishmael Beah has not only emerged intact from this chaos, he has become one of its most eloquent chroniclers. We ignore his message at our peril." --Sebastian Junger, author of A Death in Belmont and A Perfect Storm

"This is a beautifully written book about a shocking war and the children who were forced to fight it. Ishmael Beah describes the unthinkable in calm, unforgettable language; his memoir is an important testament to the children elsewhere who continue to be conscripted into armies and militias." --Steve Coll, author of Ghost Wars: The Secret History of the CIA, Afghanistan, and Bin Laden, from the Soviet Invasion to September 10, 2001, winner of the 2005 Pulitzer Prize for general Nonfiction

"This is a wrenching, beautiful, and mesmerizing tale. Beah's amazing saga provides a haunting lesson about how gentle folks can be capable of great brutalities as well goodness and courage. It will leave you breathless." --Walter Isaacson, author of Benjamin Franklin: An American Life

"A Long Way Gone hits you hard in the gut with Sierra Leone's unimaginable brutality and then it touches your soul with unexpected acts of kindness. Ishmael Beah's story tears your heart to pieces and then forces you to put it back together again, because if Beah can emerge from such horror with his humanity in tact, it's the least you can do." --Jeannette Walls, author of The Glass Castle: A Memoir

Ishmael Beah was born in 1980 in Sierra Leone, West Africa. His writing has appeared in The New York Times Magazine, Vespertine Press, LIT, Parabola, and numerous academic journals. He is a UNICEF Ambassador and Advocate for Children Affected by War; a member of the Human Rights Watch Children's Rights Advisory Committee; an advisory board member at the Center for the Study of Youth and Political Violence at the University of Tennessee, Knoxville; visiting scholar at the Center for International Conflict Resolution at Columbia University; visiting Senior Research Fellow at the Center for the Study of Genocide, Conflict Resolution, and Human Rights at Rutgers University; cofounder of the Network of Young People Affected by War (NYPAW); and president of the Ishmael Beah Foundation. He has spoken before the United Nations, the Council on Foreign Relations, and many panels on the effects of war on children. His book A Long Way Gone: Memoirs of a Boy Soldier has been published in over thirty languages and was nominated for a Quill Award in 2007. Time magazine named the book as one of the top ten nonfiction books of 2007, ranking it at number three. Ishmael Beah is a graduate of Oberlin College with a B.A. in Political Science and resides in Brooklyn, New York. He is currently completing a novel set in his home country of Sierra Leone.

GOR001120209
A Long Way Gone: Memoirs of a Boy Soldier by Ishmal Beah
Ishmal Beah
Used - Very Good
Hardback
Farrar, Straus & Giroux Inc
2007-01-19
240
0374105235
9780374105235
Winner of New Atlantic Independent Booksellers Association Award (Nonfiction) 2007 Winner of Christopher Awards (Books for Adults) 2008 Winner of Alex Awards 2008 Commended for L.A. Times Book Prize (Current Interest) 2007 Commended for Tayshas Reading 2008 Commended for Capitol Choices: Noteworthy Books for Children and Teens (Fourteen and Up) 2008 Commended for Grand Canyon Reader Award (Teen) 2010 Short-listed for Quill Awards (Biography/Memoir) 2007 Short-listed for Quill Awards (Debut Author) 2007 Short-listed for Eliot Rosewater Indiana High School Book Award 2009
Book picture is for illustrative purposes only, actual binding, cover or edition may vary.
This is a used book - there is no escaping the fact it has been read by someone else and it will show signs of wear and previous use. Overall we expect it to be in very good condition, but if you are not entirely satisfied please get in touch with us.