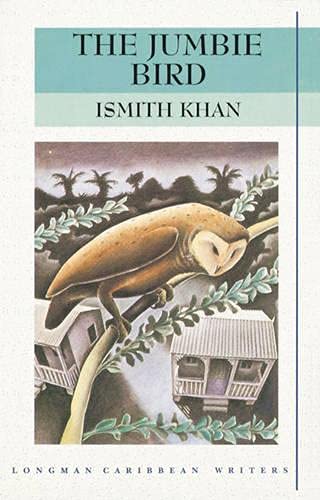 The Jumbie Bird
by Ismith Khan

In Stock
£3.29
The Longman Caribbean Writers Series comprises of many classic novels, short stories and plays by the best known Caribbean authors, together with works of the highest quality from new writers.
Well Read
Only 1 left

The Jumbie Bird by Ismith Khan

The Jumbie Bird is the tragic story of an East Indian family stranded in Trinidad, betrayed by the authorities and discarded by Mother India.

No-one can escape the sinister call of The Jumbie Bird, a ghostly message of death. It haunts the childhood world of Jamini: his father, a struggling jeweller; his fierce, proud grandfather, Kale Khan, a born fighter who dreams of returning to India; and the doomed relationship with his childhood sweetheart, Lakshmi.

The Jumbie bird returns, a symbolic and fearful omen, as Kale Khan prepares for his final battle.

A new and exciting voice .

Moves with its own poetry

Ismith Khan was born in 1925 in Port of Spain, Trinidad, in a house that looked out on the famous Woodford Square where much of the action of The Jumbie bird takes place. Indeed this is where much of the drama of pre-independence politics in Trinidad was enacted through the years that Khan was growing up. His grandfather, Kale Khan, on whom the character in the novel is based, was Pathan, one of the fiercely independent, mountain-dwelling people whose ancestral homelands straddle what is now Pakistan and Afghanistan. The Pathans are renowned for their courage and military prowess: they resisted the British in India for generations and are presently involved in another colonial war, fighting the Russians in Afghanistan. They are a proud people with a strong sense of their own traditions and culture. Like the fictional character, the 'real life' Kale Khan was very conscious of his Pathan background and tried to instil the values of his culture to his only grandson. In a letter to the critic Arthur Drayton, Ismith Khan wrote of his grandfather that he

was ever involved in all things anti-British his was a rebelliousness, his life was one of dissent, he ridiculed the Raj, chastised fellow Indians for being run over rough shod by the Sahibs.

Ismith Khan grew up then in a family dominated by this larger-than-life character who was something of a legend in the Indian community at that time.

Despite his Muslim background Ismith Khan was educated at Queens Royal College, one of Trinidad's leading secondary schools, almost exclusively attended by children of the plantocracy and upper middle class. As Arthur Drayton comments,

It is not inconceivable that like Jamini, the young protagonist in The Jumbie Bird, he experienced there (at school), or knew others who did, the uncomfortable sense of not belonging socially and economically.

So far so much like the novel, but it is important to understand that The Jumbie Bird is fiction and that although many of the characters and several of the events of the story can be traced to people and incidents in Ismith Khan's boyhood it would be a mistake to read The Jumbie Bird as simply an autobiographical account. For example, Ismith Khan points out that his own father, unlike Rahim in the novel, was a strong authoritative personality. What Ismith Khan has done is to use the scenes, characters, life style and language of a community he knows intimately to create an authentic location for his fiction. The Jumbie Bird utilises the perspective of a child growing to an understanding of his world to allow the reader insights into the nature and working of a particular community.

Ismith Khan worked as a reporter for the Trinidad Guardian for a time, before leaving Trinidad to study sociology and creative writing at American Universities. Ismith Khan lived in the USA, teaching and writing until his death in April 2002. He has published another novel, The Obeah Man (Hutchinson, London 1964) and several short stories as well as academic and critical work.

GOR005016259
The Jumbie Bird by Ismith Khan
Ismith Khan
Used - Well Read
Paperback
Hodder Education
1985-10-21
208
0582786193
9780582786196
N/A
Book picture is for illustrative purposes only, actual binding, cover or edition may vary.
This is a used book - there is no escaping the fact it has been read by someone else and it will show signs of wear and previous use. Overall we expect it to be in very good condition, but if you are not entirely satisfied please get in touch with us.