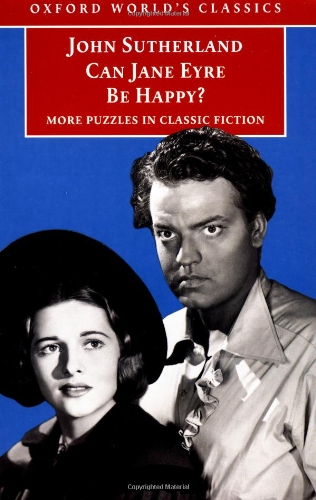 Can Jane Eyre be Happy?
by J. A. Sutherland

In Stock
£5.49
The sequel to "Is Heathcliff A Murderer?", this is another collection of literary puzzles turning up unexpected and brain-teasing aspects of the range of canonical British and American fiction in the Oxford World's Classics list. Puzzles include: why does Robinson Crusoe find only one footprint?
Very Good
Only 2 left

Can Jane Eyre be Happy? Summary

Can Jane Eyre be Happy?: More Puzzles in Classic Fiction by J. A. Sutherland

The exciting sequel to the enormously successful Is Heathcliff A Murderer?, John Sutherland's latest collection of literary puzzles, Can Jane Eyre Be Happy? turns up unexpected and brain-teasing aspects of the range of canonical British and American fiction represented in the World's Classics list. With bold imaginative speculation he investigates 32 literary conundrums, ranging from Daniel Defoe to Virginia Woolf: why does Robinson Crusoe find only 'one' footprint? How does Magwitch swim to shore with a great iron on his leg? Where does Fanny Hill keep her contraceptives? Whose side is Hawkeye on? And how does Clarissa Dalloway get home so quickly? As in its universally well received predecessor, the questions and answers are ingenious and convincing, and return the reader with new respect to the great novels that inspire them.

Can Jane Eyre be Happy? Reviews

Sutherland is not simply a sleuth, but a sympathetic alternative author; less pedant, in fact, than poet The Sunday Times Sutherland has plainly enjoyed pursuing his quarry, and so will any reader with taste for ingenious detective work. John Gross, The Sunday Telegraph Sutherland is an unmatched guide to the detail of 19th-century fiction ... as a polemical jeu d'esprit designed to send you back to Adam Bede and Wuthering Heights, this is the most engagingly boffiny book imaginable The Spectator

About J. A. Sutherland

John Sutherland is Lord Northcliffe Professor of Modern English Literature at University College, London. He has edited a number of World's Classics, including works by Anthony Trollope, Jack London, and Thackeray, and is the author of the best-selling Is Heathcliff a Murderer? Puzzles in 19th-Century Fiction (W/C, 1996).

GOR001142005
Can Jane Eyre be Happy?: More Puzzles in Classic Fiction by J. A. Sutherland
J. A. Sutherland
Oxford World's Classics
Used - Very Good
Paperback
Oxford University Press
2000-04-13
248
019283603X
9780192836038
N/A
Book picture is for illustrative purposes only, actual binding, cover or edition may vary.
This is a used book - there is no escaping the fact it has been read by someone else and it will show signs of wear and previous use. Overall we expect it to be in very good condition, but if you are not entirely satisfied please get in touch with us.