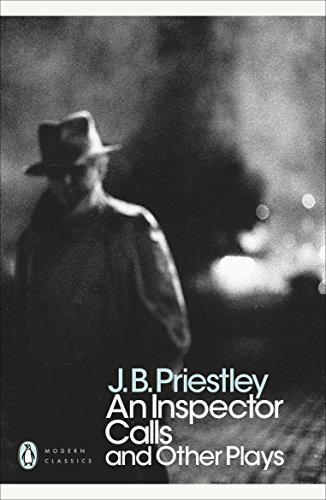 An Inspector Calls and Other Plays
by J B Priestley

In Stock
£5.99
Includes plays "An Inspector Calls", "Time and the Conways", "I Have Been Here Before", and "The Linden Tree".
Very Good Good Well Read
Only 2 left

An Inspector Calls and Other Plays Summary

An Inspector Calls and Other Plays by J B Priestley

'We don't live alone ... We are responsible for each other'

A policeman interrupts a rich family's dinner to question them about the suicide of a young working-class girl. As their guilty secrets are gradually revealed over the course of the evening, 'An Inspector Calls', J. B. Priestley's most famous play, shows us the terrible consequences of poverty and inequality. The other powerful plays in this collection - 'Time and the Conways', 'I Have Been Here Before' and 'The Linden Tree' - explore time, fate, free will and the effects of war.

If you enjoyed An Inspector Calls, you might like Arthur Miller's Death of a Salesman, also available in Penguin Modern Classics.

About J B Priestley

J.B. Priestley, the son of a schoolmaster, was born in Bradford in 1894. After leaving Belle Vue High School, he spent some time as a junior clerk in a wool office. (A lively account of his life at this period may be found in his volume of reminiscences, Margin Released.) He joined the army in 1914, and in 1919, on receiving an ox-officers' grant, went to Trinity Hall, Cambridge. In 1922, after refusing several academic posts, and having already published one book and contributed critical articles and essays to various reviews, he went to London. There he soon made a reputation as an essayist and critic. he began writing novels, and with his third and fourth novels, The Good Companions and Angel Pavement, he scored a great success and established an international reputation. This was enlarged by the plays he wrote in the 1930s and 1940s, some of these, notably Dangerous Corner, Time and the Conways and An Inspector Calls, having been translated and produced all over the world. During the Second World War he was exceedingly popular as a broadcaster. Since the war his most important novels have been Bright Day, Festival at Farbridge, Lost Empires and The Image Men, and his more ambitious literary and social criticism can be found in Literature and Western Man, Man and Time and Journey Down a Rainbow, which he wrote with his wife, Jacquetta Hawkes, a distinguished archaeologist and a well-established writer herself. It was in this last book that Priestley coined the term `Admass', now in common use. Among his latest books are Victoria's Heydey (1972), Over the Long High Wall (1972), The English (1973), Outcries and Asides, a collection of essays (1974), A Visit to New Zealand (1974), The Carfitt Crisis (1975), Particular Pleasures (1975), Found, Lost, Found, or the English Way of Life (1976), The Happy Dream (1976), English Humour (1976) and an autobiography, Instead of the Trees (1977). In 1977 J. B. Priestley received the Order of merit. He died in 1984.

GOR001440426
An Inspector Calls and Other Plays by J B Priestley
J B Priestley
Penguin Modern Classics
Used - Very Good
Paperback
Penguin Books Ltd
2001-03-29
304
014118535X
9780141185354
N/A
Book picture is for illustrative purposes only, actual binding, cover or edition may vary.
This is a used book - there is no escaping the fact it has been read by someone else and it will show signs of wear and previous use. Overall we expect it to be in very good condition, but if you are not entirely satisfied please get in touch with us.