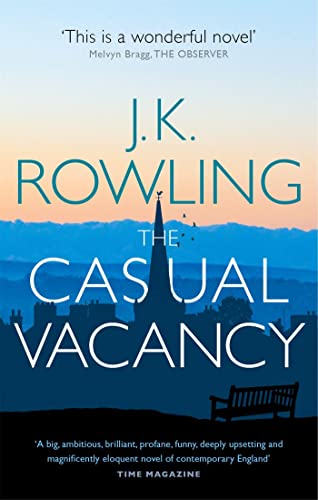 The Casual Vacancy
by J.K. Rowling

In Stock
£3.59
The first adult novel by J.K. Rowling
Like New Very Good Good
Only 3 left

The Casual Vacancy by J.K. Rowling

When Barry Fairbrother dies in his early forties, the town of Pagford is left in shock.

Pagford is, seemingly, an English idyll, with a cobbled market square and an ancient abbey, but what lies behind the pretty facade is a town at war.

And the empty seat left by Barry on the parish council soon becomes the catalyst for the biggest war the town has yet seen. Who will triumph in an election fraught with passion, duplicity and unexpected revelations?

A big novel about a small town, The Casual Vacancy is J.K. Rowling's first novel for adults. It is the work of a storyteller like no other.

This is a wonderful novel. JK Rowling's skills as a storyteller are on a par with RL Stevenson, Conan Doyle and PD James. Here, they are combined with her ability to create memorable and moving characters to produce a state-of-England novel driven by tenderness and fury * Melvyn Bragg, The Observer *
A needle-sharp and darkly comic expose of today's class-ridden society . . . A highly readable morality tale for our times * Emma Lee-Potter, Daily Express *
The Casual Vacancy is a stunning, brilliant, outrageously gripping and entertaining evocation of British society today. [J.K. Rowling] has done a rather brave thing and pulled it off magnificently * Henry Sutton, The Mirror *
One marvels at the skill with which Rowling weaves such vivid characters in and out of each other's lives * Christopher Brookmyre, The Daily Telegraph *
Heartbreaking - turning the page seems unbearable, but not as much as putting down the book would be * Deepti Hajela, Associated Press *
An exquisite and occasionally moving black comedy . . . The acid test - I suspect it would do well even if its author's name weren't J.K. Rowling * David Robinson, Scotsman *
A big, ambitious, brilliant, profane, funny, deeply upsetting and magnificently eloquent novel of contemporary England . . . This is a deeply moving book by somebody who understands both human beings and novels very, very deeply * Lev Grossman, Time Magazine *
Insightful, meaningful, daring and resolutely challenging to tabloid assumptions regarding the moral worth of individuals * Scotland on Sunday *
The action bowls along compellingly, most of the characters are vividly drawn and there are some sharp - often very sharp - observations about their social pretensions . . . a bold and distinctive effort * The Sunday Telegraph *
This is a novel of insight and skill, deftly drawn and, at the end, cleverly pulled together. It plays to her strengths as a storyteller * The Economist *
The Casual Vacancy is a brilliant novel, entertaining, intelligent, moving, passionate and hard-hitting; touching on familiar subjects but approaching them with great originality and skill. Moreover, it's unputdownable . . . The novel is a triumph * Irish Times *
Rowling is a great storyteller with a clear eye and a warm heart, and The Casual Vacancy is a moving and immensely pleasurable novel * Sunday Business Post Ireland *
Wrestles honourably and intelligently with big moral and political questions . . . a study of provincial life, with a large cast and multiple, interlocking plots, drawing inspiration from such writers as Trollope, Gaskell and, perhaps most of all, George Elliot . . . [the plot] is big, engrossing, and runs like clockwork * Guardian *
Rowling weaves a web of connections that resonate long after the book ends * Daily Express *
This is a book with a social conscience . . . Much lurks behind Pagford's idyllic facade * The Times *
Rowling once again shows her skill at laying bare the best and (more often) worst of human nature * Star Magazine *
A perfect holiday read * Best Magazine *
JK's first grown-up novel is an eminently-readable tale of small minds in small-town England * Bella *

J.K. Rowling is the author of the much-loved series of seven Harry Potter novels, originally published between 1997 and 2007. Along with the three companion books written for charity, the series has sold over 500 million copies, been translated into over 80 languages, and made into eight blockbuster films.

Originally written by J.K. Rowling in aid of Comic Relief as a Hogwarts textbook, Fantastic Beasts and Where to Find Them became the inspiration behind a new and original five-film series for Warner Bros., the first of which was released in 2016. The second film in the series, Fantastic Beasts: The Crimes of Grindelwald, was released in November 2018.

J.K. Rowling has collaborated with playwright Jack Thorne and director John Tiffany on a stage play, Harry Potter and the Cursed Child, which opened in London's West End in 2016 and on Broadway in 2018, and will have further worldwide openings in 2019.

J.K. Rowling also writes the Cormoran Strike crime novels, under the pseudonym Robert Galbraith. The fourth in this series was published in autumn 2018. The Strike books have been adapted for television for BBC and HBO television by Bronte Film & Television. J.K. Rowling is also the author of The Casual Vacancy, a standalone novel for adults, published in 2012.