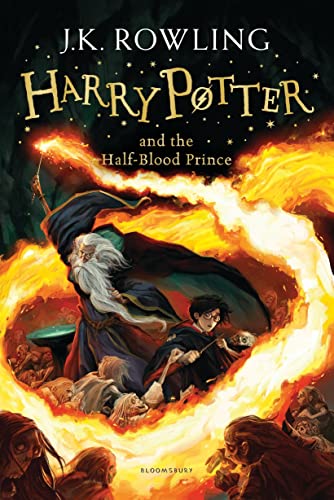 Harry Potter and the Half-Blood Prince
by J. K. Rowling

Harry Potter and the Half-Blood Prince by J. K. Rowling

When Dumbledore arrives at Privet Drive one summer night to collect Harry Potter, his wand hand is blackened and shrivelled, but he does not reveal why. Secrets and suspicion are spreading through the wizarding world, and Hogwarts itself is not safe. Harry is convinced that Malfoy bears the Dark Mark: there is a Death Eater amongst them. Harry will need powerful magic and true friends as he explores Voldemort's darkest secrets, and Dumbledore prepares him to face his destiny. These new editions of the classic and internationally bestselling, multi-award-winning series feature instantly pick-up-able new jackets by Jonny Duddle, with huge child appeal, to bring Harry Potter to the next generation of readers. It's time to PASS THE MAGIC ON ...

I've yet to meet a ten-year-old who hasn't been entranced by its witty, complex plot and the character of the eponymous * Independent *
Spellbinding, enchanting, bewitching stuff * Mirror *
Teachers say a chapter can silence the most rowdy of classes * Daily Express *
One of the greatest literary adventures of modern times * Sunday Telegraph *
The Harry Potter stories will join that small group of children's books which are read and reread into adulthood * TLS *

GOR006116262
Harry Potter and the Half-Blood Prince by J. K. Rowling
J. K. Rowling
Used - Very Good
Paperback
Bloomsbury Publishing PLC
2014-09-01
560
1408855704
9781408855706
N/A
Book picture is for illustrative purposes only, actual binding, cover or edition may vary.
This is a used book - there is no escaping the fact it has been read by someone else and it will show signs of wear and previous use. Overall we expect it to be in very good condition, but if you are not entirely satisfied please get in touch with us.