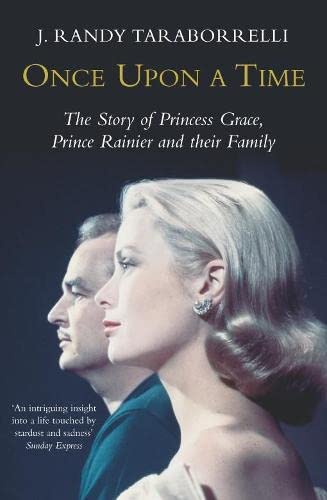 Once Upon A Time
by J. Randy Taraborrelli

Out of Stock
The powerful and moving story of one of royalty's most secretive families, by a master storyteller.
Very Good
Only 0 left

Once Upon A Time Summary

Once Upon A Time: The Story of Princess Grace by J. Randy Taraborrelli

Grace Kelly was swept away when the handsome Prince Rainier, a man she barely knew, asked for her hand in marriage. After a series of relationships with married co-stars she was exhausted by the showbusiness lifestyle. If she married Rainier she would be more than just a movie star, she would be Her Serene Highness Princess Grace. Trapped in a fairytale of her own making, Grace was forced to make sacrifices that cut deeply into the core of who she was as a woman, surrendering her desires and ambitions for her spouse and her children. Grace and Rainier may have been royalty but they were also husband and wife, and parents - and, as such, just as vulnerable to the conflicts that can contaminate any household.

Drawing upon hundreds of exclusive interviews with family and friends, Once Upon a Time portrays its subjects with passion and sympathy, revealing Grace, Rainier, Caroline, Albert and Stephanie in ways both startling and compelling.

J. Randy Taraborrelli is the author of nine books including the international bestsellers Madonna: An Intimate Biography, Call Her Miss Ross and Sinatra: The Man and the Myth. He has also written for The Times and the Daily Mail.

GOR001114283
Once Upon A Time: The Story of Princess Grace by J. Randy Taraborrelli
J. Randy Taraborrelli
Used - Very Good
Paperback
Pan Macmillan
2004-04-02
512
0330418327
9780330418324
N/A
Book picture is for illustrative purposes only, actual binding, cover or edition may vary.
This is a used book - there is no escaping the fact it has been read by someone else and it will show signs of wear and previous use. Overall we expect it to be in very good condition, but if you are not entirely satisfied please get in touch with us.