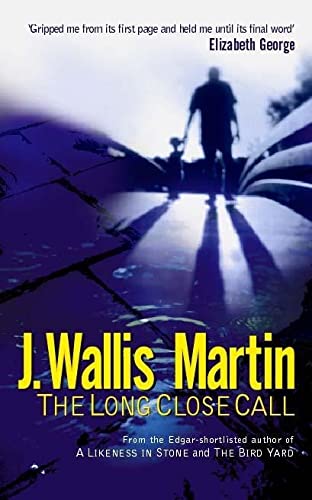 In Stock
£3.99
A stunning, multi-layered psychological thriller from the highly-acclaimed author of A Likeness in Stone and The Bird Yard.
Very Good
Only 1 left

When Robbie McLaughlan, a Flying Squad officer with London's Metropolitan Police, shoots and kills a robber during a bank raid, his private and professional life begin to fall apart. The family of the dead man discovers McLaughlan's identity, and abducts his young son with the intention of luring McLaughlan to his death. But McLaughlan is a man with a secret and, long estranged from his own father, he ultimately has no option but to turn to the man he despises, for only he can possibly help him.

The Long Close Call is J. Wallis Martin's third novel, and it places her firmly in the first division of the new crime writing generation. * The Times *
'The plot was intriguing enough to keep me wanting to read to the end' Independent on Sunday
J Wallis Martin writes chillers with consumate skill. Cleverly plotted, with characters that feel all too authentic, the tension builds at just the right pace. If you like modern thrillers, this author is unmissable. * Choice *
'With her third novel J Wallis Martin makes a serious bid to enter the definitive ranks of the psychological thriller' Times (Crime Supplement)
A wonderfully tense and atmospheric story * Dartford Times *

'With her third novel, Martin makes a serious bid to enter the ranks of the definitive writers of the pyshchological thriller'
THE TIMES

Spirited action and dialogue * Choice *
'Classy thriller' The Oxford Times
J. Wallis Martin writes like a dream... An excellent thriller * Shots *
A book you don't want to put down, so I didn't - I read it in one sitting * Observer *
. . . an engrossing story, in which the momentum is skilfully maintained * Telegraph *

J Wallis Martin, novelist and screenwriter, has a keen interest in mythology and cinema. She lives with her son and husband.

GOR002822372
The Long Close Call by J. Wallis Martin
J. Wallis Martin
Used - Very Good
Paperback
Hodder & Stoughton General Division
2001-01-18
368
0340728175
9780340728178
N/A
Book picture is for illustrative purposes only, actual binding, cover or edition may vary.
This is a used book - there is no escaping the fact it has been read by someone else and it will show signs of wear and previous use. Overall we expect it to be in very good condition, but if you are not entirely satisfied please get in touch with us.