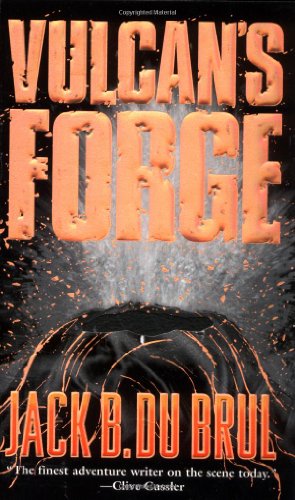 In Stock
£25.99
A nuclear bomb strikes at the fiery heart of Earth and, spewing molten lava, a volcano rises with unnatural speed from the ocean floor. It continues in hot spots round the globe, Hawaii, Washington DC and the Far East. Geologist Philip Mercer is the first to unravel the secrets of Vulcan's Forge.
Well Read
Only 1 left

Beneath the Pacific Ocean the earth writhes, spewing lava, churning water to steam, roiling the surface of the sea. A volcano surges upward, carrying in its fiery heart a mineral more precious than gold, thousands of times stronger than steel, and more powerful than uranium. Soon the volcano will break the ocean's surface. When it does, all hell will break loose. In Washington, D.C., Philip Mercer, a man of many talents currently on staff at the U.S. Geologic Survey, receives a cable from an old friend. The friend's daughter, Dr. Tish Talbot, is the sole survivor of the sinking of a research vessel a few hundred miles from Hawaii. Why is she being kept under armed guard in a hospital in Washington? On the islands of Hawaii, the nationalist/secessionist movement has been quietly growing in strength, secretly bankrolled by millionaire industrialist Takahiro Ohnishi. Now Ohnishi is ready to declare independence from the United States. If violence is the result, so be it. If the volcano growing near Hawaii surfaces outside the 200-mile limit, it will belong to whoever lands there first. If it surfaces inside the limit, it will belong to the United States - or to an independent Hawaii controlled by the ruthless Ohnishi and his shadowy masters. To the dismay of the President of the United States, it soon becomes clear that Philip Mercer - rogue geologist, former commando, a man with unexplained and unexpected connections to the most unlikely people - is the only man who can put together all the pieces of Vulcan's Forge.

"An exciting, well-honed thriller that will have Clive Cussler fans taking note of the new kid on the block."--William Hefferman, Edgar Ward Winner, author of" The Dinosaur Club"

GOR004673506
Vulcan's Forge by Jack B. Du Brul
Jack B. Du Brul
Used - Well Read
Paperback
St Martin's Press
1999-01-15
384
0812564618
9780812564617
N/A
Book picture is for illustrative purposes only, actual binding, cover or edition may vary.
This is a used book - there is no escaping the fact it has been read by someone else and it will show signs of wear and previous use. Overall we expect it to be in very good condition, but if you are not entirely satisfied please get in touch with us.