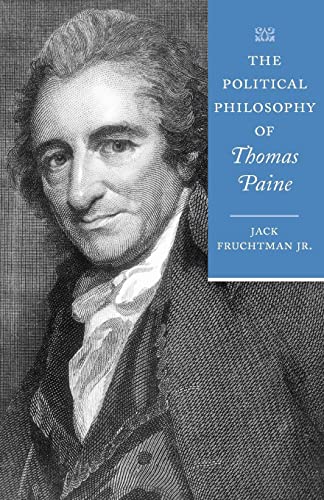 The Political Philosophy of Thomas Paine
by Jack Fruchtman, Jr.

In Stock
£19.99
On balance we may think of Paine as a secular preacher for the rule of reason.
Very Good
Only 1 left

The Political Philosophy of Thomas Paine by Jack Fruchtman, Jr.

This concise, thoughtful introduction to the work of Thomas Paine, author of Common Sense and Rights of Man, explores the impact of one of the most influential minds of the American and French Revolutions and the sources from which his thinking evolved. In Jack Fruchtman Jr.'s helpful interpretation, Paine built his argument for radical revolution in 1776 on a study of nature and Providence and a belief in natural rights. Men and women owed it to themselves to break the chains of rank, hierarchy, and even organized religion in order to live freely, embracing the possibilities of invention, progress, and equality that lay ahead. In 1793, at the height of the French Revolution and its secularizing fury, Paine reminded readers that it was nature's God who created natural rights. The rights of man thus held out both the great potential of freedom and the requirement that human beings be responsible for those who were the least fortunate in society. On balance we may think of Paine as a secular preacher for the rule of reason.

A compelling portrait of Thomas Paine as a serious, complex, and often surprising writer... This is a very useful volume for new students of US political thought, as well as for scholars seeking a quick but illuminating overview of Paine's writings and philosophy. * Choice *
Fruchtman's concise analysis is tightly focused... A coherent vision of Paine's work, encompassing his many contradictions. * Times Literary Supplement *
An insightful addition to a literature on an under-appreciated democratic theorist. -- Mario Feit * New Political Science *
After reading The Political Philosophy of Thomas Paine readers will recognise consistencies in Paine's work that reveal, if not a systematic `political philosophy', certainly a marvellous political thinker. -- Jeffrey D. Hilmer * Political Studies Review *
Jack Fruchtman's compact study of the political philosophy of Thomas Paine constitutes the fifth volume in the series, The Political Philosophy of the American Founders, edited by Garrett Ward Sheldon. Fruchtman's study adds more luster to the fine reputation already enjoyed by this series in progress... [T]he reader desirous of perusing a cogent and thought-provoking exposition and analysis of Paine's writings should consider reading, first, this monograph, multum in parvo, by Jack Fruchtman. * Eighteenth-Century Intelligencer *
Fruchtman is a Paine enthusiast, and if this succinct account does not provide the same biographical stir one gets from other works (his earlier book included), it is nonetheless a great way for the newcomer to appreciate the range, diversity, and raw power and brilliance of Paine's ideas. * Claremont Review of Books *

Jack Fruchtman Jr. is a professor of political science at Towson University and author of Atlantic Cousins: Benjamin Franklin and His Visionary Friends, The Supreme Court: Rulings on American Government and Society, and Thomas Paine and the Religion of Nature, also published by Johns Hopkins.

GOR009973636
The Political Philosophy of Thomas Paine by Jack Fruchtman, Jr.
Jack Fruchtman, Jr.
The Political Philosophy of the American Founders
Used - Very Good
Paperback
Johns Hopkins University Press
2011-12-01
224
142140401X
9781421404011
N/A
Book picture is for illustrative purposes only, actual binding, cover or edition may vary.
This is a used book - there is no escaping the fact it has been read by someone else and it will show signs of wear and previous use. Overall we expect it to be in very good condition, but if you are not entirely satisfied please get in touch with us.