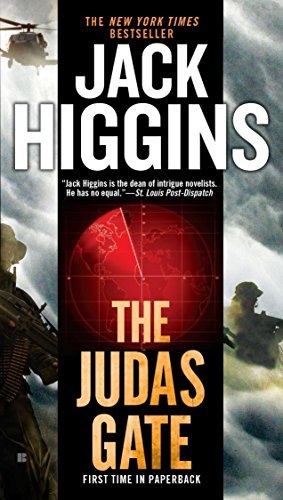 The Judas Gate
by Jack Higgins

In Stock
£3.59
A disturbing tape has made its way to British intelligence: battlefield chatter from an ambush in Afghanistan, in which 12 U.S. Army Rangers and a British medical team died. Most of the Taliban voices are Afghan, but the voice of the commander bears an Irish accent. Sean Dillon is put in charge of hunting down the traitor. Available in a tall Premium Edition.
Very Good Good
Only 3 left

The Judas Gate by Jack Higgins

General Charles Ferguson, Commander of the British Prime Minister's private hit squad and adviser to the new president of the United States, has been given a disturbing recording from Afghanistan, on which the murders of American Army Rangers and a British medical team are recorded. About half of the Taliban force voices on the tape are British. One authoritative voice is Irish; code name: Shamrock.

Shocked that one of their own could be responsible for a massacre, General Ferguson tasks Sean Dillon with hunting the traitor. But even as Dillon goes to war, the war is coming to him...

"Jack Higgins has written some of the best suspense fiction of the past fifty years."--The San Diego Union-Tribune

"When it comes to thriller writers, one name stands well above the crowd--Jack Higgins."--Associated Press

"Jack Higgins is one of the best-selling authors of popular fiction in the world, often considered the architect of the modern thriller."--The Huffington Post

"Higgins is an author with the creative power to hook the reader and keep them forever because of his terrific tales. There are many villains out there, but Higgins is by far the greatest at bringing to life the best and worst of them all."--Suspense Magazine

Jack Higgins lives on Jersey in the Channel Islands.

GOR004428202
The Judas Gate by Jack Higgins
Jack Higgins
Sean Dillon
Used - Very Good
Paperback
Unknown
0
0425244865
9780425244869
N/A
Book picture is for illustrative purposes only, actual binding, cover or edition may vary.
This is a used book - there is no escaping the fact it has been read by someone else and it will show signs of wear and previous use. Overall we expect it to be in very good condition, but if you are not entirely satisfied please get in touch with us.