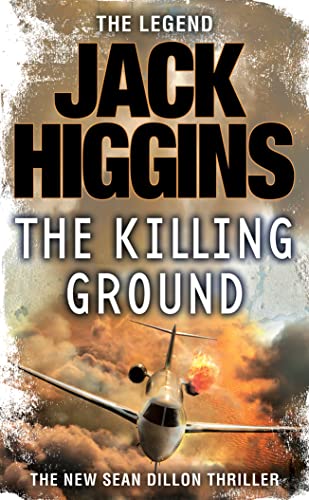 The Killing Ground
by Jack Higgins

Jack Higgins, the undisputed master of action and suspense is back with a brand new adventure featuring the unstoppable Sean Dillon.

Jack Higgins, the undisputed master of action and suspense is back with a brand new adventure featuring the unstoppable Sean Dillon.

For intelligence operative Sean Dillon, it is a routine passport check. But the events it will lead to will be as bloody as any he has ever known. The man he stops at Heathrow airport is Caspar Rashid, born and bred in England, but with family ties to a Bedouin tribe fiercely wedded to the old ways, as Rashid has just found out to his pain. His thirteen-year-old daughter, Sara, has been kidnapped by Rashid's own father and taken to Iraq to be married to a man known as the Hammer of God, one of the Middle East's most feared terrorists.

Dillon has had his own run-ins with the tribe, and when the distraught man begs him for help, he sees a chance to settle some old scores - but Dillon has no idea of the terrible chain of events he is about to unleash, nor of the implacable enemies he is about to gain.

Before his journey is done, many men will die - and Dillon may be one of them.

`Open a Jack Higgins novel and you'll encounter a master craftsman at the peak of his powers...first-rate tales of intrigue, suspense and full-on action' Sunday Express

`Higgins is a master of his craft' Daily Telegraph

`A thriller writer in a class of his own' Financial Times

GOR000348416
The Killing Ground (Sean Dillon Series, Book 14) by Jack Higgins
Jack Higgins
Sean Dillon Series
Used - Very Good
Paperback
HarperCollins Publishers
2008-05-06
320
0007223684
9780007223688
N/A
Book picture is for illustrative purposes only, actual binding, cover or edition may vary.
This is a used book - there is no escaping the fact it has been read by someone else and it will show signs of wear and previous use. Overall we expect it to be in very good condition, but if you are not entirely satisfied please get in touch with us.