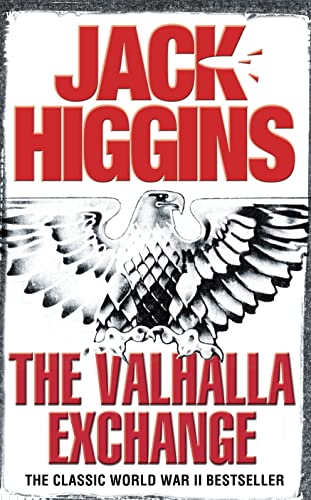 The Valhalla Exchange
by Jack Higgins

The electrifying WWII bestseller from the master of the game.

The Valhalla Exchange by Jack Higgins

The electrifying WWII bestseller from the master of the game.

On the 30th April 1945, Russian radar reported a light aircraft leaving the vicinity of the Tiergarten in Berlin. But who was on board, and where was the plane going?

Berlin was in ruins as the Russians moved relentlessly towards the concrete bunker where the Nazi adminstration had been destroyed. But one man, Reichsleiter Martin Bormann, Adolf Hitler's secretary and eminence grise had a daring plan to escape.

Far away to the south-west , at Schloss Arlberg above the River Inn, five prisoners of war were contemplating their fate. Would they be murdered by their captors or liberated by the Russians?

Unbeknown to them Bormann has his own plans. They are about to become part of a mystery that has fascinated the world for over sixty years. What exactly did happen to Bormann and his prisoners?

Another first rate page-turner from Jack Higgins, a writer at the peak of his power'
Daily Express

GOR000526805
The Valhalla Exchange by Jack Higgins
Jack Higgins
Used - Very Good
Paperback
HarperCollins Publishers
2006-12-18
320
0007223722
9780007223725
N/A
Book picture is for illustrative purposes only, actual binding, cover or edition may vary.
This is a used book - there is no escaping the fact it has been read by someone else and it will show signs of wear and previous use. Overall we expect it to be in very good condition, but if you are not entirely satisfied please get in touch with us.