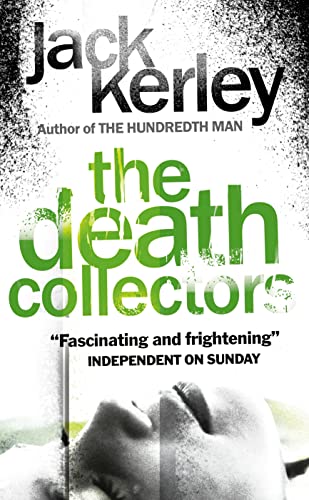 The Death Collectors
by Jack Kerley

Thirty years after his death, Marsden Hexcamp's `Art of the Final Moment' remains as sought after as ever. But this is no ordinary collection. Hexcamp's portfolio was completed with the aid of a devoted band of acolytes - and half a dozen victims, each of whom was slowly tortured to death so that their final agonies could be distilled into art.

When tiny scraps of Hexcamp's `art' begin appearing at murder scenes alongside gruesomely displayed corpses, Detective Carson Ryder and his partner Harry Nautilus must go back three decades in search of answers.

Meanwhile an auction has been announced and the death collectors are gathering. These wealthy connoisseurs of serial-killer memorabilia will pay millions to acquire Hexcamp's art - unless Carson and Harry can beat them in their quest for the anti-grail.

Praise for The Death Collectors:

`A fascinating and frightening take on the genre' Independent on Sunday

`Kerley who writes like a house on fire, has a boundless and truly ghastly imagination that'll keep you awake long after you turn the last page' Kirkus

Praise for The Hundredth Man:

`A superb debut novel. A headless torso, the heat-soaked Alabama nights, a detective with a secret. Fantastic' Sunday Express

`A chilling journey into a pitch-black mind' Michael Marshall

`A sturdy hero with a clearcut mission and a setting that holds possibilities for fresh adventure. Kerley writes in a thrusting style that pushes the action from crime scene to autopsy table...' The New York Times Book Review

`Kerley jacks up the tension effectively, building to an all-stops-out climax. The plot is a treasure chest of interlocked pieces' Booklist (starred review)

Jack Kerley worked in advertising and teaching before becoming a full-time novelist. He lives in Newport, Kentucky, but also spends a good deal of time in Southern Alabama, the setting for The Hundredth Man. He is married with two children.

GOR000740260
The Death Collectors (Carson Ryder, Book 2) by Jack Kerley
Jack Kerley
Carson Ryder
Used - Very Good
Paperback
HarperCollins Publishers
2006-05-02
528
0007180616
9780007180615
N/A
Book picture is for illustrative purposes only, actual binding, cover or edition may vary.
This is a used book - there is no escaping the fact it has been read by someone else and it will show signs of wear and previous use. Overall we expect it to be in very good condition, but if you are not entirely satisfied please get in touch with us.