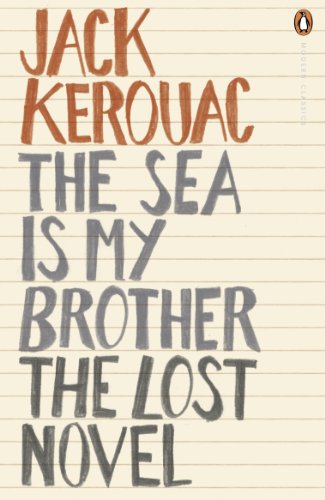 The Sea is My Brother by Jack Kerouac

Lost during the author's lifetime, it is an intense portrait of friendship and brotherhood and a meditation on the desire to escape society, following the fortunes of two men as they impulsively decide to work their passage on the S S Westminster: drinking, arguing, playing cards, dodging torpedoes and contemplating the beauty of the sea.

The Sea is My Brother: The Lost Novel by Jack Kerouac

'His first novel is a revelation ... the writing is vivid, serious and extraordinary ... wonderful' The Times

The Sea is My Brother is Jack Kerouac's very first novel, begun shortly after his tour as a merchant sailor in 1942. Lost during his lifetime, it is an intense portrait of friendship and brotherhood and a meditation on the desire to escape society, following the fortunes of two men as they impulsively decide to work their passage on the S.S. Westminster: drinking, arguing, playing cards, dodging torpedoes and contemplating the vast, terrible beauty of the sea. Published with fragments of early stories and letters, this visceral work gives a unique insight into the young Kerouac and the formation of his genius.

"Kirkus Reviews," 2/1/12 "A Jack London-esque yarn.""Publishers Weekly," 1/30/12 "While it may not be the Rosetta Stone of the beat movement, the publication of this flawed manuscript will be an event for [Kerouac's] admirers.""Booklist," 3/1/12 "Read this first effort to watch Kerouac learning the ropes." "Entertainment Weekly," 3/2/12"You'll see hints of the bebop prose that would later pour out of Kerouac's typewriter so effortlessly." "Cleveland Plain Dealer," 3/11/12"Rarely does talking seem as much like action as it does in "The Sea Is My Brother." The characters' words fire the imagination. If they don't move you, to quote Louis Jordan, 'Jack, you dead'...There is a song inside "The Sea Is My Brother," a song for anyone who has ever looked over the horizon and thought, 'I'm gonna get out of here someday.'" "Tampa"" Bay"" Times," 3/11/12 "For a glimpse of Kerouac crossing the boundary from boy to man, fans can now turn to his first novel." "Wall Street Journal," 3/20/12"["The Sea Is My Brother"] offers plenty of disarming insights into who Kerouac was as a person and writer before he slipped behind the mask of Beat Generation Zen-master...The book is enjoyable" Litreactor.com, 3/20/12""The Sea is My Brother" is a fascinating read, both in its own right and as part of Kerouac's canon." "New York"" Post," 3/18/12"There are plenty of hints of the Kerouac to come." Blurt-Online, 3/12/12"["The Sea is My Brother"] is perhaps the best of the posthumous releases....Could be considered the skeleton that would become gems.""Huffington Post," 3/23/12 "Fans of the "On the Road" author will be fascinated by the glimpse into Kerouac's early writing mind." "January Magazine," 3/22/12"For his admirers and students of his style, the book is a worthwhile read." "National Post "(Canada), 3/25/12 "A fores
Jack Kerouac was born in Lowell, Massachusetts in 1922. In 1947, enthused by bebop, the rebel attitude of his friend Neal Cassady, and the throng of hobos, drug addicts and hustlers he encountered in New York, he decided to discover America and hitchhike across the country. His writing was openly autobiographical and he developed a style he referred to as 'spontaneous prose', which he used to record the experiences of the Beat Generation. Among his many novels are On the Road, Visions of Cody, The Subterraneans, The Dharma Bums and Big Sur. He died in 1969.
GOR004771351
9780141193342
0141193344
The Sea is My Brother: The Lost Novel by Jack Kerouac
Jack Kerouac
Penguin Modern Classics
Used - Very Good
Paperback
Penguin Books Ltd
2012-11-29
432
N/A
Book picture is for illustrative purposes only, actual binding, cover or edition may vary.
This is a used book - there is no escaping the fact it has been read by someone else and it will show signs of wear and previous use. Overall we expect it to be in very good condition, but if you are not entirely satisfied please get in touch with us
Trustpilot