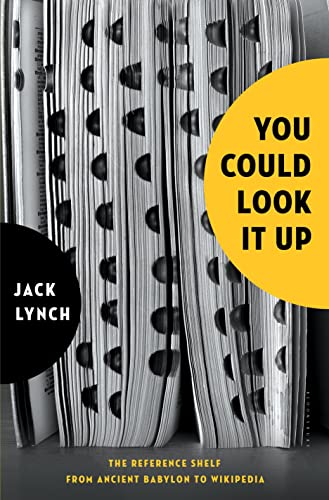 You Could Look It Up
by Jack Lynch

In Stock
£6.99
"An illuminating exploration of reference books through time and across cultures, from the Babylonian code of Hammurabi to Wikipedia"--Front jacket flap.
Well Read
Only 1 left

You Could Look It Up Summary

You Could Look It Up: The Reference Shelf From Ancient Babylon to Wikipedia by Jack Lynch

"Knowledge is of two kinds," said Samuel Johnson in 1775. "We know a subject ourselves, or we know where we can find information upon it." Today we think of Wikipedia as the source of all information, the ultimate reference. Yet it is just the latest in a long line of aggregated knowledge--reference works that have shaped the way we've seen the world for centuries. You Could Look It Up chronicles the captivating stories behind these great works and their contents, and the way they have influenced each other. From The Code of Hammurabi, the earliest known compendium of laws in ancient Babylon almost two millennia before Christ to Pliny's Natural History; from the 11th-century Domesday Book recording land holdings in England to Abraham Ortelius's first atlas of the world; from Samuel Johnson's A Dictionary of the English Language to The Whole Earth Catalog to Google, Jack Lynch illuminates the human stories and accomplishment behind each, as well as its enduring impact on civilization. In the process, he offers new insight into the value of knowledge.

You Could Look It Up Reviews

Lively and erudite . . . Lynch offers a reference book of reference books, a magical volume of infinite regress . . . You Could Look It Up can serve as a reminder of our enduring and impudent desire to keep the chaotic universe in some kind of neat and serviceable order. -- Alberto Manguel (Editor's Choice) * The New York Times Book Review *
[A] wholly absorbing chronicle of the reference book. * The Wall Street Journal *
A casual but fascinating read that feels like sneaking into a library after hours, it offers an absorbing glimpse into the world-changing and frequently turbulent history of the reference shelf. * NPR.org *
As readers make their ways through this book, they are certain to discover a wide variety of must-haves . . . Great stuff for anyone who loves knowledge, deep or trivial. -- starred review * Kirkus Reviews *
Anyone who enjoys reference books will embrace this erudite compilation and Lynch's appreciative, fluent commentary. * Publishers Weekly *
No harmless drudge he, [Lynch] takes a broad view of his subject and includes lively pages on several dozen radically different works . . . The serendipity of its contents is part of the book's fun [along with] its high anecdotal and amusement quotient. -- Michael Dirda * Washington Post *
Especially fun for librarians, You Could Look It Up will entertain and enlighten many scholarly inclined readers and anyone who loves traditional reference works. -- starred review * Booklist *
Fascinating . . . You Could Look It Up is a history not simply of reference books as a genre but of the broader question of how we organize information and why. * Shelf Awareness *
You Could Look It Up is an entertaining, enlightening look into the vast, complex world of reference books and their tireless compilers across the ages, extending far beyond the familiar works of Samuel Johnson, Peter Roget, and Noah Webster. -- Steve Kleinedler, executive editor, THE AMERICAN HERITAGE DICTIONARY OF ENGLISH LANGUAGE
A stunning tour de force, Lynch's new book is compulsively readable. No one has ever packed so much fascinating information about reference books into one volume. Polymaths of the world, delight! -- Bryan A. Garner, chief editor of BLACK'S LAW DICTIONARY and author of GARNER'S MODERN ENGLISH USAGE
highly readable . . . exuberant * The American Conservative *

Jack Lynch is a professor of English at Rutgers University. He specializes in English literature of the eighteenth century and the history of the English language. He is the author of several books including The Lexicographer's Dilemma: The Evolution of 'Proper' English, from Shakespeare to South Park and Samuel Johnson's Insults: A Compendium of Snubs, Sneers, Slights, and Effronteries from the Eighteenth-Century Master. He lives in New Jersey.

GOR009947573
You Could Look It Up: The Reference Shelf From Ancient Babylon to Wikipedia by Jack Lynch
Jack Lynch
Used - Well Read
Hardback
Bloomsbury Publishing USA
2016-04-21
464
080277752X
9780802777522
N/A
Book picture is for illustrative purposes only, actual binding, cover or edition may vary.
This is a used book. We do our best to provide good quality books for you to read, but there is no escaping the fact that it has been owned and read by someone else previously. Therefore it will show signs of wear and may be an ex library book.