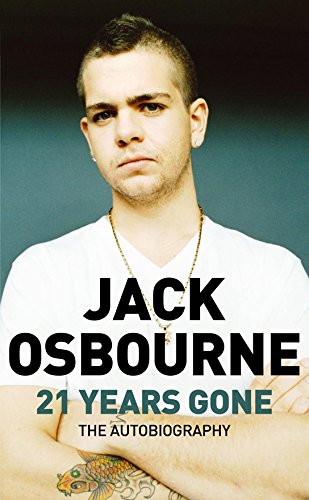 In Stock
£4.49
The inspiring story of Jack's journey from drug and alcohol addictions that nearly killed him to his remarkable recovery.
Very Good
Only 2 left

By the time Jack was sixteen he was addicted to alcohol and prescription drugs, was hanging out with rock stars in LA and living a life that any teenager would aspire to. And then The Osbournes turned him into a global celebrity. But as much as Jack enjoyed his fame, underneath it all he was still an awkward teenager, using his sense of humour as a shield. And with fame and money came a greater access to drugs - his addictions took a firmer hold on him and his behaviour was soon out of control.

In 21 Years Gone Jack writes with brutal frankness about his descent into addiction and the low point he reached when Sharon was diagnosed with cancer. Scared that his mum might die, Jack retreated further into his alcoholic shell, hating who he was, hating what he did. Every night he would get into bed and pray for God to take his life. When Sharon realised what was happening she told Jack he had to go to rehab - and slowly he turned his life around. Discovering a passion for extreme sports, he went from overweight and unfit to the lean young man he is today - courtesy of such adventures as running with the bulls in Pamplona, fighting a Thai martial arts expert known only as 'The Man' and scaling El Capitan, one of the world's toughest climbs.

By turns funny, disarmingly honest and moving, 21 Years Gone is the amazing story of young man who has confronted his demons and defeated them.

Jack Osbourne is an English media personality with dual American and British citizenship. As the son of heavy metal singer Ozzy Osbourne, he starred on MTV's Emmy Award winning reality series The Osbournes, along with his father, mother Sharon, and sister Kelly. Jack has since pursued a career as a fitness and travel reporter, presenting shows such as Jack Osbourne: Adrenaline Junkie and BBC's Saving Planet Earth. In summer 2016, he and father Ozzy travellied the world in the History Channel reality series Ozzy & Jack's World Detour. He is the author of an autobiography titled 21 Years Gone and lives with his wife and two children.

GOR001148369
21 Years Gone: The Autobiography by Jack Osbourne
Jack Osbourne
Used - Very Good
Hardback
Pan Macmillan
2006-09-01
240
0230014321
9780230014329
N/A
Book picture is for illustrative purposes only, actual binding, cover or edition may vary.
This is a used book - there is no escaping the fact it has been read by someone else and it will show signs of wear and previous use. Overall we expect it to be in very good condition, but if you are not entirely satisfied please get in touch with us.