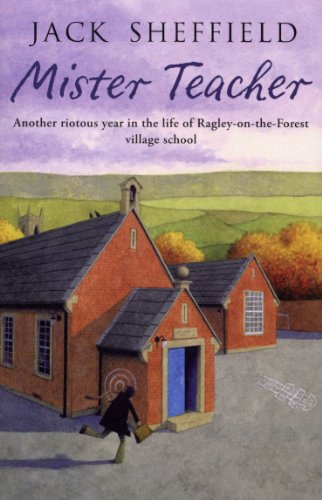 In Stock
£3.99
It's 1978, and Jack Sheffield begins his second year as headmaster of a small village primary school in North Yorkshire. Jack tries to help, and so begins a journey through the seasons of Yorkshire life in which the school is the natural centre of the community.
Very Good
7 in stock

It's 1978, and Jack Sheffield begins his second year as headmaster of a small village primary school in North Yorkshire. There are three letters on his desk - one makes him smile, one makes him sad and one is destined to change his life forever. This is from nine-year-old Sebastian, suffering from leukaemia in the local hospital, who writes a heartbreaking letter addressed to 'Mister Teacher'. Jack tries to help, and so begins a journey through the seasons of Yorkshire life in which the school is the natural centre of the community. There's a colourful cast of characters who accompany Jack through the ups and downs of the school year including Vera, the school secretary who worships Margaret Thatcher and whose greatest ambition is to become President of the Women's Institute; Ruby, the 20-stone caretaker who sings like Julie Andrews; and Dorothy, the coffee shop assistant who is desperate to be Wonder Woman. Most of all, there is the lovely Beth Henderson, a teacher from a nearby school, who with her sister Laura presents Jack with an unexpected dilemma ...

"Take a dash of Heartbeat, add a sprinkling of All Creatures Great And Small, throw in a liberal dash of Please Sir! and you have Mister Teacher. It will have you crying tears of laughter and sadness. A joy to read - and perfect for a Sunday night TV series!" * Glasgow Evening Times *
"A charming memoir" * Daily Express *
"Wonderfully comic" * Lincolnshire Today *
"A story that will have you in tears of laughter as well as sadness" * Manchester Evening News *
"A story full of humour and affection" * The Good Book Guide *

Jack Sheffield was born in 1945 and grew up in the tough environment of Gipton Estate, in North East Leeds. After a job as a 'pitch boy', repairing roofs, he became a Corona Pop Man before going to St John's College, York, and training to be a teacher. In the late seventies and eighties, he was a headteacher of two schools in North Yorkshire before becoming Senior Lecturer in Primary Education at Bretton Hall near Wakefield. It was at this time that he began to record his many amusing stories of village life portrayed in Teacher, Teacher!, his first novel. Mister Teacher is his second novel and continues the story of life in the fictional village of Ragley-on-the-Forest. His new book, Dear Teacher, will be published in early 2009. Jack Sheffield lives in York and Hampshire. Visit his website at www.jacksheffield.com

GOR001094437
Mister Teacher by Jack Sheffield
Jack Sheffield
Used - Very Good
Paperback
Transworld Publishers Ltd
2008-09-25
368
0552155276
9780552155274
N/A
Book picture is for illustrative purposes only, actual binding, cover or edition may vary.
This is a used book - there is no escaping the fact it has been read by someone else and it will show signs of wear and previous use. Overall we expect it to be in very good condition, but if you are not entirely satisfied please get in touch with us.