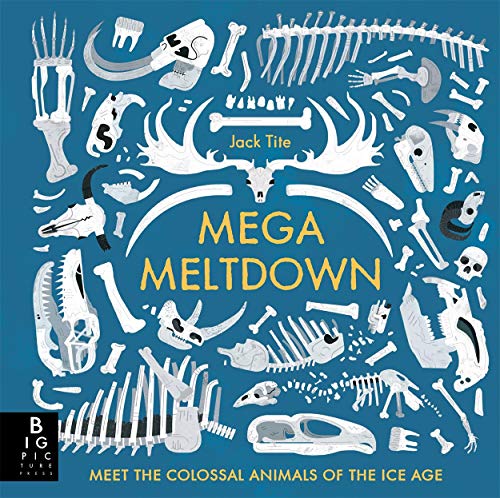 Nearly three million years ago the Ice Age began. Oceans froze, ice sheets covered land and animals, along with humans, found ways to thrive. These prehistoric creatures were weird, wonderful and enormous. Explore the Earth continent by continent and come face to face with Ice-Age megafauna, such as North America's short-faced bear - which was 3.7 metres tall, and mastodons - which weighed twice as much as a T. rex! Accompanying the images, lively text allows you imagine exactly what these mega animals were like!
An absolutely stunning book which introduces its readers to the colossal creatures of the ice age. You'll travel back nearly 3 million years to prehistoric earth to a time when giant sloths wrestled with sabre-toothed cats.Journey across the continents and learn about unimaginably huge creatures such as the teratorn with its eight metre wingspan or the giant armadillo with a shell so large that early man would use it as a shelter.With bold illustrations, punchy, witty text and giant fold-out pages, I can imagine any book enthusiast spending hours looking at this book, noticing more details and learning more facts each time. Truly magnificent. * Library Girl and Book Boy *
Around three million years ago, an ice age gripped the planet. Oceans froze and animals tried to survive. The short-faced bear (which, on its hind legs, stood nearly as tall as a double-decker bus) and the mastodon, which weighed twice as much as T.rex, are just two of the astonishing creatures featured in this mind-bending book. * Science and Nature *
Welcome to the museum that is always open to explore... Step inside the pages of this beautiful book to discover galleries of galactic matter, expertly curated to bring you the experience of a fascinating exhibition from the comfort of your own home. Planetarium features all aspects of space, from the Sun and our Solar System, to the lives of stars, the Milky Way and the Universe beyond. With stunning artwork from Chris Wormell and informative text by Professor Raman Prinja, Planetarium is the perfect gift for anyone with an interest in this fascinating field. * World Book Day *
Mega Meltdown is the latest large format, non-fiction book from Templar. This time the colossal creatures that existed during the last Ice Age come under scrutiny. Readers will learn how nearly three million years ago our planet was covered with ice. During this time, many animals became extinct, but others found ways to survive and adapt into creatures well equipped to survive the cold climate. The book opens with a map of the Ice Age world showing the continents not quite the same as we know them today. On each double-page spread are beautiful illustrations of fierce prehistoric animals from the various continents, such as the woolly Mammoth. The ice age creatures were huge and awe inspiring, and readers will learn why their size helped the, survive in such extreme conditions. Many o these fearsome creatures have evolved into animals still around today. Comparisons are made between today's wildlife and their ancestors; e.g. the North American Mastodon which is related to modern day elephants; the Australasian Giant Wombat, and of course, Neanderthals from Eurasia. This amazing book, with gate folds on many pages, will keep children's fascinated interest, helping them understand their planet's history and modern perils. -- Jane Hall * Carousel *
Jack Tite (Author, Illustrator) Jack Tite is an illustrator and motion designer from the UK. He graduated from De Montfort University with a first-class BA Hons in Graphic Design and Illustration. His work is influenced by vintage and mid-century illustrators, with simplified shapes, gritty textures and a strict colour palette. He is interested in prehistoric wildlife as well as European and American history, which inspires his work. Jack is a dog-lover, food enthusiast, computer nerd, avid drummer and jogger. His first book Mega Meltdown was shortlisted for the AOI World Illustration Awards 2019 'Children's Book Category'.
NGR9781783708314
9781783708314
178370831X
Mega Meltdown by Jack Tite
Jack Tite
New
Hardback
Templar Publishing
2018-10-18
64
N/A
Book picture is for illustrative purposes only, actual binding, cover or edition may vary.
This is a new book - be the first to read this copy. With untouched pages and a perfect binding, your brand new copy is ready to be opened for the first time
Trustpilot