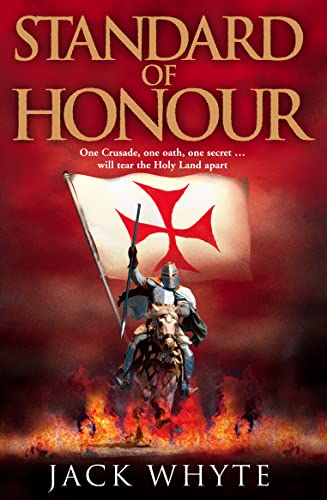 Standard of Honour
by Jack Whyte

The story of the rise and fall of the powerful and mysterious Knights of the Temple: the Third Crusade under Richard the Lionheart.

Standard of Honour by Jack Whyte

The story of the rise and fall of the powerful and mysterious Knights of the Temple: the Third Crusade under Richard the Lionheart.

It is sixty years since the secret Brotherhood of Sion, founders of the Knights Templar, uncovered the treasure vouchsafed them beneath the Temple Mount in Jerusalem. Now the ambitious and ruthless Plantagenet King Richard the Lionheart leads the Third Crusade against Saladin, and both the honour of the Templars and the mission of the Brotherhood are at risk.

Andrew Sinclair is one of the few survivors of the Battle of Hattin in 1187. As a member of the clandestine Brotherhood he was taught Arabic before being sent to the Holy Land on a mission that neither the Order of Templars nor the leaders of the Pope's armies can know of. Sinclair's captivity following the battle led to his friendship with the infidel and threatened to divide his loyalty. One of the great secrets of the Brotherhood is that they are not Christians, unlike the Templars.

Sinclair's cousin and fellow member of the Brotherhood, Sir Andre St Clair, arrives with Richard from Cyprus. The secret mission they must pursue will lead them into the desert and the lair of the fearsome Assassins. And meanwhile Saladin's clever tactics in battle, including the butchery of the magnificent destriers, the massive horses that carry armoured Frankish knights, bring reversals to the Christian cause from start of the Crusade.

But it is Richard the Lionheart's treachery and deceit that convince both cousins that the Crusade is a sham, and that all men are venal and greedy, driven by the lust for power. Only their knowledge of the Order of Sion saves them from despair: their secret mission becomes more vital than ever before.

This glorious epic tells the true and truly astonishing story of the Knights of the Black and White.

Jack Whyte was born and raised in Scotland, and educated in England and France. He migrated to Canada from the UK, in 1967, as a teacher of High School English, but he only taught for a year before starting to work as a professional singer, musician, actor and entertainer. In the early 1970s, Whyte researched, wrote, directed and appeared in a one man show based on the life and times of Robert Burns, Scotland's national poet.
Whyte's interest in the history of Britain springs from his early Classical education in Scotland during the 1950s, and he has pursued his fascination with those times ever since. Whyte is married, with five adult children, and lives in British Columbia, Canada.

GOR001155919
Standard of Honour by Jack Whyte
Jack Whyte
Used - Very Good
Paperback
HarperCollins Publishers
2008-03-17
400
0007207476
9780007207473
N/A
Book picture is for illustrative purposes only, actual binding, cover or edition may vary.
This is a used book - there is no escaping the fact it has been read by someone else and it will show signs of wear and previous use. Overall we expect it to be in very good condition, but if you are not entirely satisfied please get in touch with us.