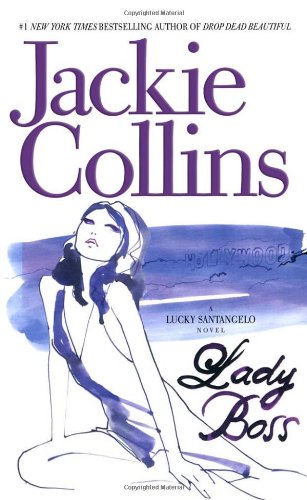 In Stock
£3.59
Finding love with film star Lennie Golden, mobster's daughter Lucky Santangelo prepares to take over Panther studios--a move that will test her marriage, tempt her to infidelity, and thrust her into Hollywood's wild side.
Well Read
Only 1 left

The dangerously beautiful Lucky-- star of two of Jackie Collins' previous smash, international number one bestsellers, "Chances" and "Lucky"-- returns in "Lady Boss". And this time the shockingly sensual, ruthlessly clever Lucky is out to conquer Hollywood!

In "Chances" Lucky grew up in a top crime family. In "Lucky", she was married three times. And now, in "Lady Boss", she takes on Hollywood and wins!

Panther Studios is the prize and Lucky wants it... In her quest for power she meets adversaries and enemies, friends and betrayers. And her relationship with her husband, charismatic comedian and movie star, Lennie Golden is put to the test.

Lucky's first challenge is to buy the only movie studio still not controlled by a powerful conglomerate-- Panther Studios, owned by the retired, irascible, old Abe Panther. But Abe won't sell his beloved studio to Lucky until she proves she has the guts to make it in Hollywood. It's his idea that she disguise herself as a secretary and go in undercover to find out what's really going on. It's a challenge that also satisfies Lucky's passion for adventure-- and her desire to take chances...

In the process, Lucky uncovers a world of financial scheming, big-time betrayal, and bizarre sex.

When Lucky makes her final move, assuming the role of "Lady Boss" at Panther Studios, she stuns the entire industry and sets off a series of shock waves, not only threatening her marriage to Lennie, but bringing down on her head the hatred of crime boss Carlos Bonnatti-- a hatred that goes back generations, putting in peril her life, and the lives of everyone close to her!

With "Lady Boss", Jackie Collins brings back one of her most intriguing and endearing characters, Lucky Santangelo. She also proves once again that she is the unquestioned queen of glamorous fiction.

"On the beach and in the bedroom, perhaps no one plays with the heart -- and other body parts -- as successfully as scandal queen Jackie Collins".

There have been many imitators, but only ever one Jackie Collins. The iconic British author has been called a "raunchy moralist" by the director Louis Malle and "Hollywood's own Marcel Proust" by Vanity Fair. With millions of her books sold in more than forty countries, and with thirty-one New York Times bestsellers to her credit, she is one of the world's top-selling novelists. From glamorous Beverly Hills bedrooms to Hollywood move studios; from glittering rock concerts in London to the yachts of Russian billionaires, Jackie Collins chronicled the scandalous lives of the rich, famous, and infamous from the inside looking out. "I write about real people in disguise," she once said. "If anything, my characters are toned down--the truth is much more bizarre!" Her first novel, The World is Full of Married Men, was published in 1968 and established Collins as an author who dared to step where no other female writers had gone before. She followed it year after year with one successful title after another, including Chances, the first installment of a sprawling nine-book saga introducing the street-smart, sexy, and dynamic Lucky Santangelo. The eighties saw Jackie hitting her stride with the seminal blockbuster, Hollywood Wives, as well as Lucky, Hollywood Husbands, and Rock Star. In recent years she kept fans entertained with Poor Little Bitch Girl, The Power Trip, and her final novel, The Santagelos, never wavering on her commitment to take her readers on a "wild ride"! Six of her novels have been adapted for film or TV and Universal Pictures has recently optioned the Santangelo series with a view to bringing Lucky to the big screen. Jackie was awarded an OBE (Order of the British Empire) by the Queen of England in 2013 for her services to literature and charity. When accepting the honor she said to the Queen, "Not bad for a school drop-out"--a revelation capturing her belief that both passion and determination can lead to big dreams coming true. Jackie Collins lived in Beverly Hills where she had a front row seat to the lives she so accurately captured in her compulsive plotlines. She was a creative force, a trailblazer for women in fiction and in her own words "A kick-ass writer!"

GOR010198707
Lady Boss by Jackie Collins
Jackie Collins
Used - Well Read
Paperback
Simon & Schuster
1998-11-30
630
0671023470
9780671023478
N/A
Book picture is for illustrative purposes only, actual binding, cover or edition may vary.
This is a used book. We do our best to provide good quality books for you to read, but there is no escaping the fact that it has been owned and read by someone else previously. Therefore it will show signs of wear and may be an ex library book.