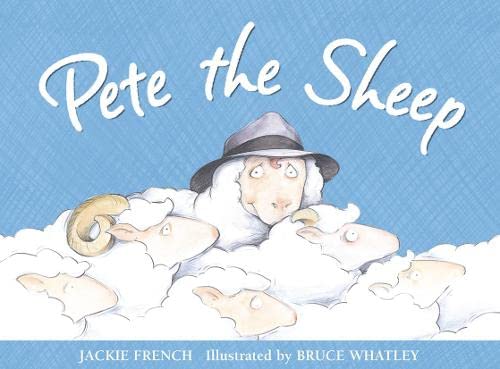 Pete the Sheep
by Jackie French

A hilarious new story, celebrating style and individuality, from the award-winning creators of `Diary of a Wombat'. Laugh out loud at this shaggy-sheep tale, made for shearing!

Pete the Sheep by Jackie French

A hilarious new story, celebrating style and individuality, from the award-winning creators of `Diary of a Wombat'. Laugh out loud at this shaggy-sheep tale, made for shearing!

When Shaun the sheep-shearer starts work at a new farm the other shearers are gobsmacked by his unusual companion. Shaun doesn't have a sheepdog. Shaun has Pete...a sheep-sheep!

Much to the other shearers dismay, the sheep take to Shaun and Pete, and in no time they are refusing to be shorn by any other team. So in jealous anger, they turf Shaun and Pete out of the barn to fend for themselves.

Luckily, our dynamic duo know there's more than one way to shear a sheep and soon business is booming...in `Shaun's Sheep Salon'!

This brilliantly funny and original story will have children and parents laughing out loud.

Praise for `Diary of a Wombat':

`Bruce Whatley's illustrations bring the story to life in a way that is both endearing and amusing. It's easy to see why this book has won several awards in Jackie French's native Australia. It deserves to be a huge hit here too, as it feels really fresh and original.' Publishing News

Jackie French was born in Sydney in 1953, grew up in Brisbane, graduated from the University of Queensland and moved to her present home in NSW bush land in her mid twenties. Over the past 10 years she has published over a hundred books on diverse subjects ranging from children's fiction to pest control!

Bruce Whatley was born in the United Kingdom and emigrated with his parents to Australia during his childhood. He often collaborates on picture books with his wife, Rosie Smith.

GOR001200782
Pete the Sheep by Jackie French
Jackie French
Used - Very Good
Paperback
HarperCollins Publishers
2007-01-03
32
0007228082
9780007228089
N/A
Book picture is for illustrative purposes only, actual binding, cover or edition may vary.
This is a used book - there is no escaping the fact it has been read by someone else and it will show signs of wear and previous use. Overall we expect it to be in very good condition, but if you are not entirely satisfied please get in touch with us.