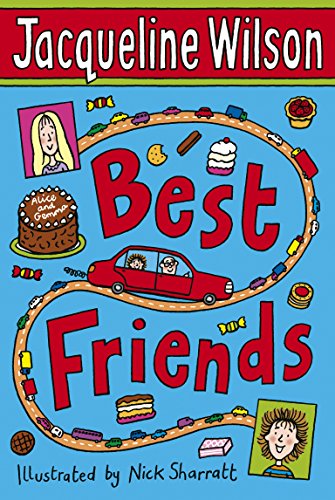 Used Price
2,99 £
New RRP 6,99 £
Free Shipping in the UK
Gemma and Alice were born on the same day and have been devoted best friends ever since. Despite Gemma's larger-than-life personality and Alice's quieter, calmer character, the two are inseparable - until Alice has to move house, all the way to Scotland.
Reviews:
Trustpilot
Very Good Good

Gemma and Alice were born on the same day and have been devoted best friends ever since. Despite Gemma's larger-than-life personality and Alice's quieter, calmer character, the two are inseparable - until Alice has to move house, all the way to Scotland. Gemma is utterly distraught, particularly at the thought that Alice might find a new best friend. Is there anything Gem's brothers, or perhaps her grandad, can do to help?

"There's no stopping Jacqueline . . ." * The Sunday Times *
"Wilson tells a story of laughter, love, tears, and trouble in this hilarious tale" * The Good Book Guide *
"Read it. I'm sure you'll love it" * Reading Matters *
"As ever, the storytelling is superb, the language direct, and the author shows her great skill in seeing things from a child's perspective" * South Wales Argus *
"A really interesting book with something in it for everyone" * Newcastle Upon Tyne Evening Chronicle *

GOR001131893
Best Friends by Jacqueline Wilson
Jacqueline Wilson
Used - Very Good
Paperback
Random House Children's Publishers UK
2008-10-09
224
0440868513
9780440868514
N/A
Book picture is for illustrative purposes only, actual binding, cover or edition may vary.
This is a used book - there is no escaping the fact it has been read by someone else and it will show signs of wear and previous use. Overall we expect it to be in very good condition, but if you are not entirely satisfied please get in touch with us.