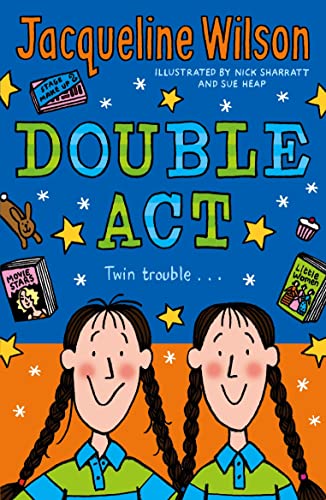 In Stock
£3.99
Ruby and Garnet are ten-year-old twins. Bossy, bouncy, funny Ruby loves to take charge, and is desperate to be a famous actress, while quiet, sensitive, academic Garnet loves nothing more than to curl up with one of her favourite books.
Very Good Good
5 in stock

Ruby and Garnet are ten-year-old twins. They're identical, and they do EVERYTHING together, especially since their mother died three years earlier - but they couldn't be more different. Bossy, bouncy, funny Ruby loves to take charge, and is desperate to be a famous actress, while quiet, sensitive, academic Garnet loves nothing more than to curl up with one of her favourite books. And when everything around the twins is changing so much, can being a double act work for ever?

"Wilson's comic exploration of the twin-world shows the desire to separate fighting a powerful genetic magnetism. In a clever touch, each narrator is given a different illustrator" * Independent on Sunday *
"A book of the highest quality. It will be very, very popular too. Hurrah!" * Mail on Sunday *
"Hilarious tale which contains dark notes that ring very true" * The Times *
"An exuberant story . . . The ingenious split narrative, inventive page design and lots of incidental pictures make this book irresistible" * Guardian *
"Jacqueline Wilson has a rare gift for writing lightly and amusingly about emotional issues Bookseller" * Bookseller *

Jacqueline Wilson (Author) Jacqueline Wilson wrote her first novel when she was nine years old, and she has been writing ever since. She is now one of Britain's bestselling and most beloved children's authors. She has written over 100 books and is the creator of characters such as Tracy Beaker and Hetty Feather. More than forty million copies of her books have been sold. As well as winning many awards for her books, including the Children's Book of the Year, Jacqueline is a former Children's Laureate, and in 2008 she was appointed a Dame. Jacqueline is also a great reader, and has amassed over 20,000 books, along with her famous collection of silver rings. Find out more about Jacqueline and her books at www.jacquelinewilson.co.ukSue Heap (Illustrator) Sue Heap is a children's picture book illustrator and story writer. She has worked in collaboration with a number of writers including Sally Lloyd-Jones. Sue and Sally worked on a series of How to . . . books with How to be a Baby being a New York Times bestseller. Another of Sue's books is Cowboy Baby, inspired by a visit to Arizona, which won the prestigious Gold Smarties Award for best picture book. Sue lives in Oxfordshire.Nick Sharratt (Illustrator) Nick Sharratt has written and illustrated many books for children including Shark in the Park, You Choose and Pants. He has won numerous awards for his picture books, including the Sheffield Children's Book Award and the 2001 Children's Book Award. He has also enjoyed stellar success illustrating Jacqueline Wilson's books. Nick lives in Hove.

GOR000889557
Double Act by Jacqueline Wilson
Jacqueline Wilson
Used - Very Good
Paperback
Random House Children's Publishers UK
2006-10-05
208
0440867592
9780440867593
N/A
Book picture is for illustrative purposes only, actual binding, cover or edition may vary.
This is a used book - there is no escaping the fact it has been read by someone else and it will show signs of wear and previous use. Overall we expect it to be in very good condition, but if you are not entirely satisfied please get in touch with us.