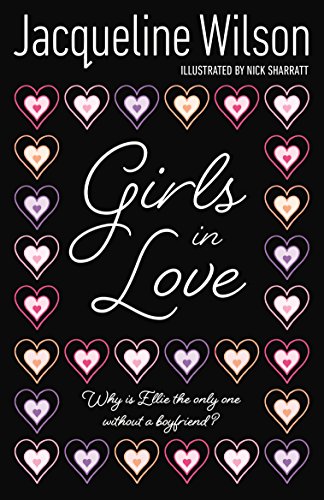 Girls In Love
by Jacqueline Wilson

Girls In Love by Jacqueline Wilson

Meet Ellie and her best friends Nadine and Magda, three teenage girls just starting Year Nine with a lot on their minds - mainly boys! Told in the bright, sparky and authentic voice of Ellie, Girls in Love is a funny, frank and revealing look at their friendships, problems and heartaches that older fans of bestselling author Jacqueline Wilson will adore. Books in the series: 1. Girls in Love 2. Girls Under Pressure 3. Girls Out Late 4. Girls in Tears

"Mix some Adrian Mole-style philosophising with Judy Blume-type teenage angst and you have the recipe for Girls in Love, a hilarious, deftly written novel" * BBC Family Life Magazine *
"Will certainly stir pre-teen interest . . . Told with her usual readable style" * The Bookseller *
"Delightful" * Observer *
"A moving and realistic story about love and about losing a parent" * Newcastle Upon Tyne Evening Chronicle *

GOR001155007
Girls In Love by Jacqueline Wilson
Jacqueline Wilson
Girls
Used - Good
Paperback
Random House Children's Publishers UK
2007-10-04
208
0552557331
9780552557337
N/A
Book picture is for illustrative purposes only, actual binding, cover or edition may vary.
This is a used book - there is no escaping the fact it has been read by someone else and it will show signs of wear and previous use. Overall we expect it to be in very good condition, but if you are not entirely satisfied please get in touch with us.