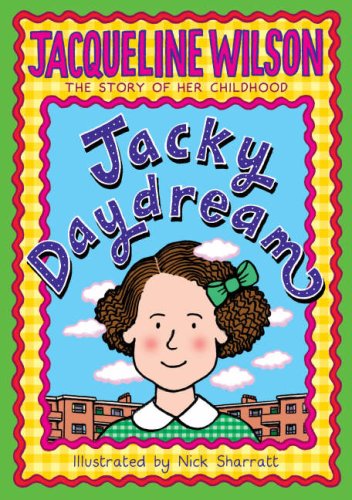 In Stock
£4.49
Takes a look back at the author's own childhood in the story of friendships, loneliness, books, toys, parents, and more. This work explores her early years with the lightness of touch that imbues her novels and covers issues such as her parents' extra-marital affairs with delicacy. It features photographs and illustrations by Nick Sharratt.
Like New Very Good
8 in stock

Everybody knows Tracy Beaker, Jacqueline Wilson's best-loved character. But what do they know about Jacqueline herself? In this fascinating book, discover: how Jacky played with paper dolls like April in "Dustbin Baby"; how she dealt with an unpredictable father like Prue in "Love Lessons"; how she sat entrance exams like Ruby in "Double Act". But most of all how Jacky loved reading and writing stories. Losing herself in a new world was the best possible way she could think of spending her time. From the very first story she wrote, "Meet the Maggots", it was clear that this little girl had a very vivid imagination. But who would've guessed that she would grow up to be the mega-bestselling, award-winning Jacqueline Wilson! Jacqueline Wilson takes a look back at her own childhood in this captivating story of friendships, loneliness, books, toys, parents and much more. She explores her early years with the same warmth and lightness of touch that imbues her novels and covers such difficult issues as her parents' extra-marital affairs with delicacy. With photographs and new illustrations by Nick Sharratt, this book is a delight for all of Jacky's fans, and a treat for any new readers too.

JACQUELINE WILSON is an extremely well-known and hugely popular author. THE ILLUSTRATED MUM was chosen as British Children's Book of the Year in 1999 and was winner of the Guardian Children's Fiction Award 2000. Jacqueline has won the prestigious Smarties Prize and the Children's Book Award for DOUBLE ACT, which was also highly commended for the Carnegie Medal. LOVE LESSONS has been longlisted for the Carnegie Medal in 2006 and is on the short list for the Long Novel section of the Highland Children's Book Award. Jacqueline was awarded an OBE in 2002. * 'A brilliant writer of wit and subtlety' THE TIMES * 'Hugely popular with seven to ten year olds: she should be prescribed for all cases of reading reluctance' INDEPENDENT ON SUNDAY * 'Has a rare gift for writing lightly and amusingly about emotional issues' BOOKSELLER

GOR000696578
Jacky Daydream by Jacqueline Wilson
Jacqueline Wilson
Used - Very Good
Hardback
Random House Children's Publishers UK
2007-03-01
352
0385610157
9780385610155
N/A
Book picture is for illustrative purposes only, actual binding, cover or edition may vary.
This is a used book - there is no escaping the fact it has been read by someone else and it will show signs of wear and previous use. Overall we expect it to be in very good condition, but if you are not entirely satisfied please get in touch with us.