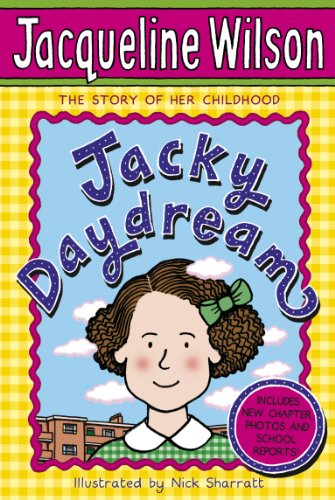 In Stock
£3.99
Lots of Jacqueline Wilson's characters are well-known and well-loved by thousands of readers: Hetty Feather, Ruby and Garnet, Pearl and Jodie, Elsa, Lily and, of course, the brilliant Tracy Beaker!
Very Good Good
10 in stock

Lots of Jacqueline Wilson's characters are well-known and well-loved by thousands of readers: Hetty Feather, Ruby and Garnet, Pearl and Jodie, Elsa, Lily and, of course, the brilliant Tracy Beaker! But how much do you know about Jacqueline herself? Jacqueline takes a look back at her own childhood and teenage years in this captivating story of friendships, loneliness, books, family life and much more. She explores her past with the same warmth and lightness of touch that make her novels so special. Best of all, she reveals how she was always determined to be a writer; from the very first story she wrote, it was clear that this little girl had a very vivid imagination! But who would've guessed that she would grow up to be the mega-bestselling, award-winning Jacqueline Wilson? With original photographs and new illustrations by Nick Sharratt, this book is a delight for all of Jacky's fans, and a treat for any new readers too.

"A dream come true for the millions of Jacqueline Wilson fans" -- Katie Law * Evening Standard *
"A book with cross-over appeal for all her fans" -- Sue Steel * The Bookseller *
"With her usual deceptive cleverness, Wilson has made Jacky Daydream very easy to read, yet it is a book with depth and complexity actually suitable for a wide range of readers . . . I don't know how this lady does it, but she always does it well, and she always makes it look easy" -- Jill Murphy * thebookbag.co.uk *
"Pitched firmly at her young fans, though it's an amusing and touching read for adults too" * Irish Times *
"This book is brilliant" * Waterstone's Books Quarterly *

GOR000933161
Jacky Daydream by Jacqueline Wilson
Jacqueline Wilson
Used - Very Good
Paperback
Random House Children's Publishers UK
2008-03-13
368
0440867207
9780440867203
N/A
Book picture is for illustrative purposes only, actual binding, cover or edition may vary.
This is a used book - there is no escaping the fact it has been read by someone else and it will show signs of wear and previous use. Overall we expect it to be in very good condition, but if you are not entirely satisfied please get in touch with us.