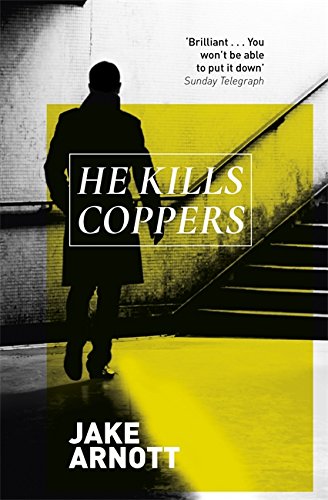 He Kills Coppers
by Jake Arnott

In Stock
£3.99
Jake Arnott's 'mesmerizing, brilliant' (New York Times Book Review) second novel, a literary thriller that delves into corruption on both sides of the law and at the heart of the state.
Very Good Good
5 in stock

He Kills Coppers by Jake Arnott

Jake Arnott's 'mesmerizing, brilliant' (New York Times Book Review) second novel, a literary thriller that delves into corruption on both sides of the law and at the heart of the state.

During the long hot summer of 1966, a senseless murder shocks the nation and brings the World Cup euphoria to an abrupt end. Yet it marks a beginning for three men, who are inextricably linked to the crime and its consequences: an ambitious detective struggling with his conscience; a tabloid journalist with a nose for a nasty story; and a disaffected thief, haunted by his violent past.

Spanning three decades of profound social change, this gripping novel explores corruption on both sides of the law and at the very heart of the state.

Brilliant ... you won't be able to put it down. * Mark Sanderson, Sunday Telegraph Summer Reading *
Mesmerizing. Brilliant. * New York Times Book Review *
Many thought that Jake Arnott's debut, 'The Long Firm', was good but not quite as good as the hype tried to convince us it was. Frankly, Hemingway, Hammett and Greene together would have been hard pressed to come up with anything that good. His eagerly awaited follow-up, 'He Kills Coppers', has arrived - and it's better. * Time Out *
Brilliant ... this bitter tour de force has a feeling of permanence. * Washington Post Book World *
[A] highly impressive thriller; a powerfully organized plot is matched by a steely narrative control that pays out just enough information to keep us on tenterhooks. The unfolding of the murder and cover-up is deftly handled, and there's a nice sideline in pithy historical detail: from the psychedelic 1960s to the uncaring Thatcherite '80s, the panorama is always authentic - and always at the service of the narrative. * Good Book Guide *
Compelling ... Arnott is a writer of many shades and, as in his debut, The Long Firm, shows his penchant for combining challenging storylines with strong storytelling. * Max Davidson, Sunday Telegraph *
Arnott is a craftsman at what he does, a real cabinetmaker of pulp fiction, with everything nicely dovetailed * Sunday Times *
Arnott nails every crunch and splatter of his dirty world ... A wicked delight. * People *
Intoxicating * Scotland on Sunday *
A British version of James Ellroy's L.A. Confidential. * Publishers Weekly *
Propels Arnott further into a league of his own * Independent on Sunday *
Brilliant * Literary Review *
Easily as good, if not better, than the superb Long Firm ... A stylish tour-de-force * Big Issue *

GOR000499984
He Kills Coppers by Jake Arnott
Jake Arnott
Used - Very Good
Paperback
Hodder & Stoughton General Division
2001-11-17
336
034074880X
9780340748800
N/A
Book picture is for illustrative purposes only, actual binding, cover or edition may vary.
This is a used book - there is no escaping the fact it has been read by someone else and it will show signs of wear and previous use. Overall we expect it to be in very good condition, but if you are not entirely satisfied please get in touch with us.