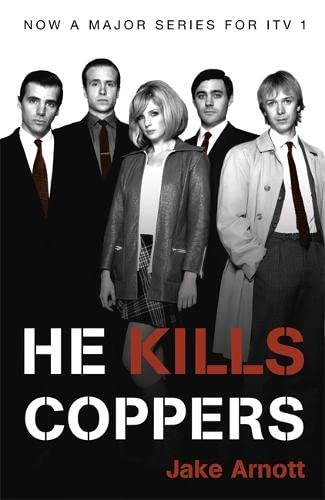 He Kills Coppers
by Jake Arnott

In Stock
£4.49
The dazzling follow-up to THE LONG FIRM, reissued to coincide with Channel 4's 3 part TV dramatisation
Very Good
Only 1 left

He Kills Coppers by Jake Arnott

August 1966: the long hot summer of World Cup euphoria is suddenly shattered by a brutal crime that shocks a nation seemingly at ease with itself. Three characters' fates are irrevocably bound up with this event and consequences that reverberate across three decades: an ambitious detective dragged into intrigues of corruption; a gutter press journalist with a nose for a nasty story; and a disaffected petty criminal pushed over the edge by a violent crime that haunts him.

An epic story that looks at morality and corruption on both sides of the law and at the very heart of the state.

Brilliant ... you won't be able to put it down. * Mark Sanderson, Sunday Telegraph Summer Reading *
Compelling ... Arnott is a writer of many shades and, as in his debut, THE LONG FIRM, shows his penchant for combining challenging storylines with strong storytelling. * Max Davidson, Sunday Telegraph *
Arnott is a craftsman at what he does, a real cabinetmaker of pulp fiction, with everything nicely dovetailed * Sunday Times *
Intoxicating * Scotland on Sunday *
Propels Arnott further into a league of his own * Independent on Sunday *
Brilliant * Literary Review *
Easily as good, if not better, than the superb LONG FIRM ... A stylish tour-de-force * Big Issue *

Jake Arnott was born in 1961, and lives in London. He is the author of THE LONG FIRM, published by Sceptre in 1999 and subsequently made into an acclaimed BBC TV series. His second novel, HE KILLS COPPERS, was also made into a series by Channel 4. He has since published the novels TRUECRIME, JOHNNY COME HOME, THE DEVIL'S PAINTBRUSH and THE HOUSE OF RUMOUR.

GOR004668191
He Kills Coppers by Jake Arnott
Jake Arnott
Used - Very Good
Paperback
Hodder & Stoughton
2008-04-03
336
0340961015
9780340961018
N/A
Book picture is for illustrative purposes only, actual binding, cover or edition may vary.
This is a used book - there is no escaping the fact it has been read by someone else and it will show signs of wear and previous use. Overall we expect it to be in very good condition, but if you are not entirely satisfied please get in touch with us.