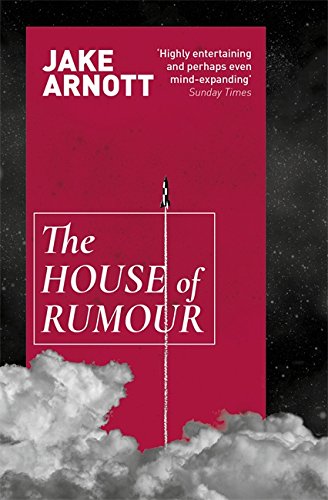 The House of Rumour
by Jake Arnott

In Stock
£4.49
A mind-bending, thrilling journey into 20th-century history and outer space - 'a brightly coloured portrait of our times that is alternatively intimate and epic . . . brilliant' (Independent on Sunday).
Very Good
7 in stock

The House of Rumour Summary

The House of Rumour by Jake Arnott

A mind-bending, thrilling journey into 20th-century history and outer space - 'a brightly coloured portrait of our times that is alternatively intimate and epic . . . brilliant' (Independent on Sunday).

In 1941, Larry Zagorski was a naive young writer of science-fiction. Seven decades on, he looks back on that crucial year and traces his place in a mysterious web - one that connects the Second World War with the Space Age, stretches from London to Cuba and Southern California, and links Ian Fleming with Rudolf Hess in a conspiracy that reverberates in the present.

Could this be the secret history of the 20th century? In a mesmerising novel peopled by spies and propagandists, the conned and the heartbroken, dreamers and fanatics, the question is: who will you believe?

The House of Rumour Reviews

It may be the ideal holiday read for those who like to take their brains with them on vacation. * Mark Lawson, Guardian *
Highly entertaining and perhaps even mind-expanding, Arnott's high-class conjuring act shows that truth really is stranger than fiction. * Phil Baker, The Sunday Times *
A supremely intelligent book as well as a surprisingly warm one. * Roz Kaveney, Independent *
Arnott offers a brightly coloured portrait of our times that is alternatively intimate and epic...The House of Rumour is a brilliant achievement that invites repeated readings * James Kidd, Independent on Sunday *
If this is that dark Prince Arnott's Jonbar Hinge, the future looks bright. * Andrew Anthony, Observer *
A potent mix of fact and fiction that takes on 20th-century history but remains a page-turner * Elle *
The House of Rumour is a page-turner with exceptional style, depth, thought, camp, counter-history and intrigue. It's both sci-fi/fantasy pulp and an ambitiously epic work of cosmic proportions: a welcome paradox of a novel that boldly toys with the boundaries between high and low-brow art. * Kirkus Review *
It isn't a book, it's a revelation. * Geek Syndicate blog *

GOR004702198
The House of Rumour by Jake Arnott
Jake Arnott
Used - Very Good
Paperback
Hodder & Stoughton General Division
2013-03-28
416
0340922737
9780340922736
N/A
Book picture is for illustrative purposes only, actual binding, cover or edition may vary.
This is a used book - there is no escaping the fact it has been read by someone else and it will show signs of wear and previous use. Overall we expect it to be in very good condition, but if you are not entirely satisfied please get in touch with us.