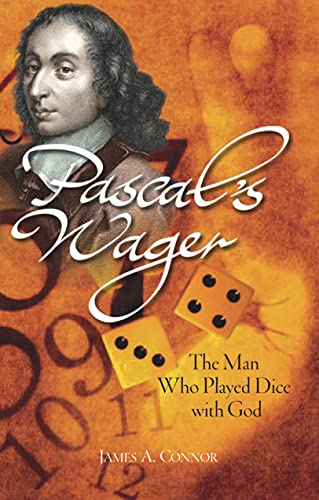 Pascal's Wager
by James A. Connor

In Stock
£10.99
An intellectual giant who paved the way for modernity and dared apply probability to faith.
Very Good
Only 1 left

Pascal's Wager: The Man Who Played Dice with God by James A. Connor

A child prodigy, Pascal made essential additions to Descartes' work at the age of 16. By the age of 19, he had invented the world's first mechanical calculator. But despite his immense contributions to modern science, it is Pascal's wager with God that set him apart as a man fully engaged with both religious and scientific pursuits. One night in 1654, Pascal had a visit from God, an experience that would change his life. Struggling to explain God's existence to others, he dared apply his mathematical work to religious faith. He argued for the existence of God basing his position on outcomes - his famous wager. By applying to the existence of God the same rules that governed the existence and position of the universe, Pascal sounded the death knell for medieval 'certainties', paving the way for modern thinking.

"Pascal's Wager is a splendid read. Connor [...] a historian who understands religion and science equally [...] keeps us turning the page." -- Michael Gurian, author of The Minds of Boys
"James Connor gives a racy account of a remarkable man [...] in a book that is a fascinating read." -- Rev. Dr. John Polkinghorne, author of Quarks Chaos & Christianity
"Jim Connor is a gifted, talented man of letters..." -- Malachy McCourt, author of A Monk Swimming
"Bet on reading Connor's fascinating chronicle and you can't go wrong!" -- Paul Halpern, author of Brave New Universe
"A compelling and readable study of one of the most influential thinkers in religious history." -- Publishers Weekly

About James A. Connor

James A. Connor is Professor of English at Kean University in Union, New Jersey. He is the author of Kepler's Witch and Silent Fire (both HarperCollins US).

GOR003637898
Pascal's Wager: The Man Who Played Dice with God by James A. Connor
James A. Connor
Used - Very Good
Paperback
Lion Hudson Plc
2007-09-21
224
0745952976
9780745952970
N/A
Book picture is for illustrative purposes only, actual binding, cover or edition may vary.
This is a used book - there is no escaping the fact it has been read by someone else and it will show signs of wear and previous use. Overall we expect it to be in very good condition, but if you are not entirely satisfied please get in touch with us.