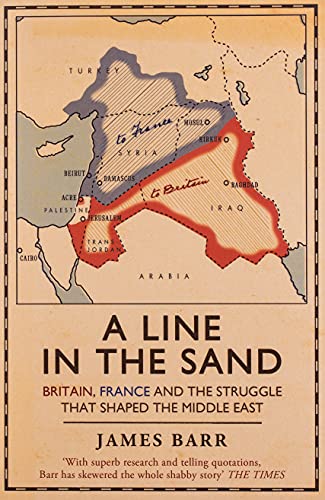 A Line in the Sand
by James Barr

In Stock
£6.49
The untold story of how British-French rivalry drew the battle-lines of the modern Middle East
Very Good Good
Only 4 left

A Line in the Sand Summary

A Line in the Sand: Britain, France and the struggle that shaped the Middle East by James Barr

In 1916, in the middle of the First World War, two men secretly agreed to divide the Middle East between them. Sir Mark Sykes was a visionary politician; Francois Georges-Picot a diplomat with a grudge. The deal they struck, which was designed to relieve tensions that threatened to engulf the Entente Cordiale, drew a line in the sand from the Mediterranean to the Persian frontier. Territory north of that stark line would go to France; land south of it, to Britain. Against the odds their pact survived the war to form the basis for the post-war division of the region into five new countries Britain and France would rule. The creation of Britain's 'mandates' of Palestine, Transjordan and Iraq, and France's in Lebanon and Syria, made the two powers uneasy neighbours for the following thirty years.

Through a stellar cast of politicians, diplomats, spies and soldiers, including T. E. Lawrence, Winston Churchill and Charles de Gaulle, A Line in the Sand vividly tells the story of the short but crucial era when Britain and France ruled the Middle East. It explains exactly how the old antagonism between these two powers inflamed the more familiar modern rivalry between the Arabs and the Jews, and ultimately led to war between the British and the French in 1941 and between the Arabs and the Jews in 1948.

In 1946, after many years of intrigue and espionage, Britain finally succeeded in ousting France from Lebanon and Syria, and hoped that, having done so, it would be able to cling on to Palestine. Using newly declassified papers from the British and French archives, James Barr brings this overlooked clandestine struggle back to life, and reveals, for the first time, the stunning way in which the French finally got their revenge.

A Line in the Sand Reviews

'With superb research and telling quotations, Barr has skewered the whole shabby story...The convulsion of that fateful line in the sand are still being felt today - not only in the Middle East, but throughout the world' -- Michael Binyon * The Times *
'Racy... [Barr] is right to assert that few British readers grasp the ferocity of Anglo-French antagonism in the Levant' -- Max Hastings * Sunday Times *
'One of the unexpected responses to reading this masterful study is amazement at the efforts the British and French each put into undermining each other' * The Spectator *
'The very grubby coalface of foreign policy...I found the entire book most horribly addictive' * Independent *
'Lively and entertaining. He has scoured the diplomatic archives and has come up with a rich hail that brings his narrative to life' * Financial Times *
'James Barr's history of imperial machinations in the Middle East offers a revelatory slant on the continuing crisis in that area... an outstanding piece of research and a damning take on what stoked current Middle Eastern woes' * Metro *
'James Barr has succeeded better than any author before him in telling the fascinating story of Anglo-French rivalries in the modern Middle East... Outstanding' -- Eugene Rogan, author of 'The Arabs: A History
'The book resembles a gripping spy thriller...an expertly researched and authoritative book that is easy to read' * Military Times *
'Barr is particularly good at identifying and portraying officials and agents engaged in these tit-for-tat reprisals that blurred the distinction between patriotism and crime' * Literary Review *
'Engaging and well-researched... James Barr's lively account provides some quite astounding sketches of bluster, bickering and bravado' * BBC History Magazine *
The struggle between Britain and France for mastery of the Middle East between 1914 and the late 1940s, is analysed by James Barr in his excellent new book. It is a complex story of intrigue and skulduggery, which Barr pieces together in a deft, well-written narrative. A journalist by profession, he manages to bring the whole subject alive through a series of well-chosen details and characters' * History Today *
'History at its meticulously researched and addictive best' * Dublin Review of Books *

James Barr has worked in politics, at the Daily Telegraph, in the City, at the British Embassy in Paris, and is currently a visiting fellow at King's College, London. He read modern history at Oxford has travelled widely in the Middle East. His previous book, A Line in the Sand, is also available from Simon & Schuster. He lives with his wife and two children in south London.

GOR004008417
A Line in the Sand: Britain, France and the struggle that shaped the Middle East by James Barr
James Barr
Used - Very Good
Paperback
Simon & Schuster Ltd
2012-04-26
464
1847394574
9781847394576
N/A
Book picture is for illustrative purposes only, actual binding, cover or edition may vary.
This is a used book - there is no escaping the fact it has been read by someone else and it will show signs of wear and previous use. Overall we expect it to be in very good condition, but if you are not entirely satisfied please get in touch with us.