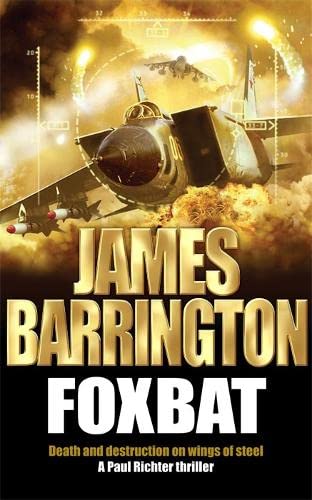 Back in 1976, a Russian front-line pilot defected to Japan in a MiG-25 Foxbat interceptor, flying virtually at sea level to avoid pursuing fighters and surface-to-air missiles. With about thirty seconds of fuel remaining, he landed at Hakodate Airport, bursting a tyre and skidding off the runway. Before the aircraft was handed back to the Russians, American intelligence agencies reduced it to a pile of components and then rebuilt it. Despite the wealth of intelligence gleaned, they completely failed to realise the purpose for which the Foxbat was created.

Moving to the present, American satellites have detected unusual activity at several Algerian air bases, and at Ain Oussera one large hangar has been cordoned off and armed guards posted outside. Western intelligence agencies suspect that Algeria might be working-up its forces prior to launching an attack on Libya or Morocco, with potentially destabilising effects in the region. They're also concerned that they might have obtained new aircraft or weapon systems, perhaps secreted in the guarded hangar at Ain Oussera. The only way to find out is to get someone to look inside the building, and it will have to be a covert insertion.

This is where Paul Richter is called in, as `a deniable asset', in an exciting non-stop thriller that moves rapidly through Bulgaria, Russia, and ultimately North Korea.

James Barrington, who himself worked in covert operations, is swiftly building a reputation and following as a writer of high-class, authentic, UK-based espionage thrillers including Overkill, Pandemic and Payback.

GOR001166987
Foxbat by James Barrington
James Barrington
Used - Very Good
Paperback
Pan Macmillan
2008-08-01
464
0230014720
9780230014725
N/A
Book picture is for illustrative purposes only, actual binding, cover or edition may vary.
This is a used book - there is no escaping the fact it has been read by someone else and it will show signs of wear and previous use. Overall we expect it to be in very good condition, but if you are not entirely satisfied please get in touch with us.