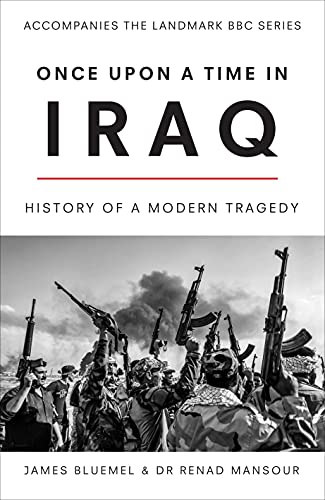 Once Upon a Time in Iraq
by James Bluemel

Once Upon a Time in Iraq Summary

Once Upon a Time in Iraq by James Bluemel

In war, there is no easy victory.

When troops invaded Iraq in 2003 to topple Saddam Hussein's regime, most people expected an easy victory. Instead, the gamble we took was a grave mistake, and its ramifications continue to reverberate through the lives of millions, in Iraq and the West. As we gain more distance from those events, it can be argued that many of the issues facing us today - the rise of the Islamic State, increased Islamic terrorism, intensified violence in the Middle East, mass migration, and more - can be traced back to the decision to invade Iraq.

In The Iraq War, award-winning documentary maker James Bluemel collects first-hand testimony from those who lived through the horrors of the invasion and whose actions were dictated by such extreme circumstances. It takes in all sides of the conflict - working class Iraqi families watching their country erupt into civil war; soldiers and journalists on the ground; American families dealing with the grief of losing their son or daughter; parents of a suicide bomber coming to terms with unfathomable events - to create the most in-depth and multi-faceted portrait of the Iraq War to date. Accompanying a major BBC series, James Bluemel's book is an essential account of a conflict that continues to shape our world, and a startling reminder of the consequences of our past decisions.

James Bluemel is an Emmy and BAFTA award winning filmmaker. His landmark documentary series Exodus: the Journey to Europe and the follow up series, The Journey Continues were both broadcast on the BBC and PBS Frontline and charted the journeys of refugees as they fled their homes and tried to find asylum in Europe. Filmed over 4 years, it won the BAFTA for Director - Factual 2017.

GOR010633916
Once Upon a Time in Iraq by James Bluemel
James Bluemel
Used - Very Good
Hardback
Ebury Publishing
2019-10-28
416
1785944568
9781785944567
N/A
Book picture is for illustrative purposes only, actual binding, cover or edition may vary.
This is a used book - there is no escaping the fact it has been read by someone else and it will show signs of wear and previous use. Overall we expect it to be in very good condition, but if you are not entirely satisfied please get in touch with us.