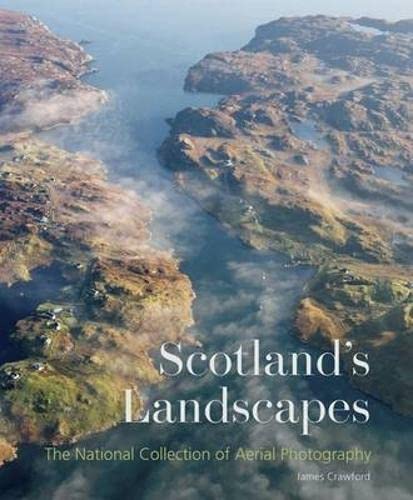 The third book in a series showcasing Scotland's National Collection of Aerial Photography. Features some of the most recent high quality photography of the nation, divided into four chapters that capture the essence and uniqueness of Scotland's landscapes: Islands, Highlands, Lowlands and Coastlines.

As the glaciers of the last Ice Age receded, humans ventured into the far north, exploring a wild, fertile territory. Nomadic hunter-gatherers at first, they made the decision to stay for good - to farm and to build.

The landscapes they lived on were remarkable in their diversity. Vast forests of pine and birch ran through one of the world's oldest mountain ranges - once as high as the Himalayas but over millennia scoured and compressed by sheets of ice a mile thick. On hundreds of islands around a saw-edged coastline, communities flourished, linked to each other and the wider world by the sea, the transport superhighway of ancient times. It was a place of challenges and opportunity. A place we know today as Scotland.

Over the past 10,000 years, every inch of Scotland - whether remote hilltop, fertile floodplain, or storm-lashed coastline - has been shaped, changed and moulded by its people. No part of the land is without its human story. From Orkney's immaculately preserved Neolithic villages to Highland glens stripped of nineteenth century settlements, from a Skye peninsula converted to an ingenious Viking shipyard, to a sheer Hebridean clifftop used as the site of a spectacular lighthouse, Scotland's history is written into its landscapes in vivid detail. Scotland's Landscapes tells the enduring story of this interaction between man and his environment. Stunning new imagery from the National Collection of Aerial Photography comes together to build up a picture of a dramatic terrain forged by thousands of years of incredible change. These are Scotland's landscapes as you have never seen or understood them before.

'Scotland's Landscapes is full to bursting with truly breathtaking scenes from the country's every corner - the various items from the National Collection of Aerial Photography assembled here show that Scotland may have been built and roughly shaped by geomorphological processes, but the crucial touches were bestowed by human history.'

'A visually stunning book from the team which brought us Victorian Scotland, Above Scotland, and Above Scotland - Cities. They have produced another cracking coffee table book over which devotees of Scotland can pore for hours ... A must-have for those who would like to know Scotland better.'

'It is easy to understand the fascination of aerial photographs. Firstly, not everybody can take them. Secondly, not everybody gets to fly over the Highlands and Islands on a cloudless day and see them from above. And thirdly, they can be absolutely heartstopping. There is a photograph from the sky of Vatersay in Scotland's Landscapes. I would almost sooner look at this photo than be there.'

James Crawford is Communications Manager for the Royal Commission on the Ancient and Historical Monuments of Scotland (RCAHMS), and has worked as a journalist, editor and literary agent. He has previously co-authored Above Scotland, Above Scotland - Cities and Victorian Scotland.

GOR007418523
9781902419893
1902419898
Scotland's Landscapes: The National Collection of Aerial Photography by James Crawford
James Crawford
Used - Very Good
Paperback
Historic Environment Scotland
2014-05-06
224
N/A
Book picture is for illustrative purposes only, actual binding, cover or edition may vary.
This is a used book - there is no escaping the fact it has been read by someone else and it will show signs of wear and previous use. Overall we expect it to be in very good condition, but if you are not entirely satisfied please get in touch with us
Trustpilot